If Imran Khan is so generous, statesman, he should give us Masood Azhar, says Sushma Swaraj

For the fourth time, China has used its veto power to block India's bid to designate JeM chief Masood Azhar as a global terrorist. 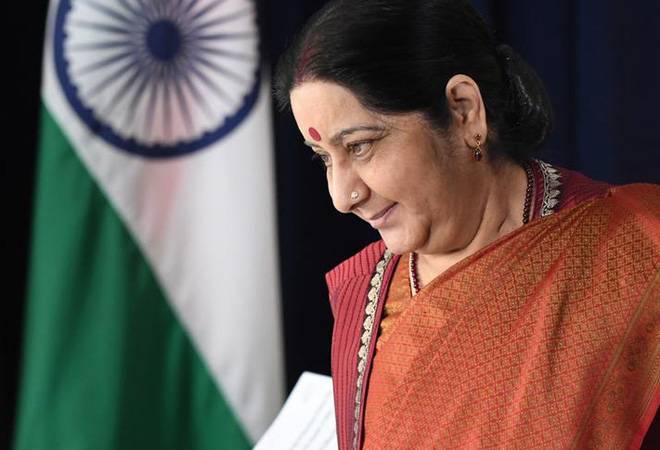 "We do not want talk on terror, we want action on it. Terror and talks cannot go together", says Sushma Swaraj

Talking on 'India's World: Modi Government's Foreign Policy', External Affairs Minister Sushma Swaraj has said India can only have good bilateral relations with Pakistan if it takes action against terror outfits burgeoning on its soil.

She said, "Why did the Pakistani military attack us on behalf of JeM? You not only keep JeM on your soil, but fund them and when the victim country retaliates, you attack it on the terror outfit's behalf". "If Imran Khan (Pakistan prime minister) is so generous and a statesman, he should give us Masood Azhar", she said.

She stated India could not have good bilateral relations with Pakistan if its army and ISI were bent on destroying the relations time and again.

Asserting that "talks and terror cannot go together", she said India could not have a dialogue with Pakistan if they did not act upon the terror groups on its soil.

"We do not want talk on terror, we want action on it. Terror and talks cannot go together", she said.

Recently, foreign minister Sushma Swaraj was invited as the 'Guest of Honour' to attend the foreign minsters' meet of the Organisation of Islamic Corporation (OIC) States, in Abu Dhabi. In a major diplomatic victory to India, she stated how every religion dictates love and compassion and not terrorism or violence.

"The fight against terrorism is not a confrontation against any religion. It cannot be. Just as Islam literally means peace, none of the 99 names of Allah mean violence . Similarly, every religion in the world stands for peace, compassion & brotherhood", the External Affairs Minister had said.

Also read: No dialogue with Pakistan before action on terror outfits: Swaraj