In the developed economies though, FDI flows fell by 6 per cent to an estimated $643 billion from their revised $683 billion in 2018. It remained at a historically low-level, at half of their peak in 2007 With 16 per cent surge in Foreign Direct Investment (FDI) inflows in 2019, India drove the FDI growth in South Asia. The United Nations Conference on Trade and Development (UNCTAD), in its Global Investment Trend Monitor report, revealed that the country attracted $49 billion FDI inflows last year compared to $42 billion in 2018. A major part of it went to services industries, including information technology. Inflows into Bangladesh and Pakistan declined by 6 per cent and 20 per cent, respectively to $3.4 billion and $1.9 billion. Overall, South Asia recorded a 10 per cent increase in FDI to $60 billion.

FDI flows to developing economies remained stable at an estimated $695 billion, added the report. Latin America and the Caribbean saw an increase of 16 per cent, with growth concentrated in South America. Africa continued to register a modest rise (+3 per cent) while flows to developing Asia fell by 6 per cent.

In the developed economies though, FDI flows fell by 6 per cent to an estimated $643 billion from their revised $683 billion in 2018. It remained at a historically low-level, at half of their peak in 2007. Equity investment flows exhibited sluggishness.

According to the report, the global foreign direct investment remained flat in 2019, at $1.39 trillion, a decline of 1 per cent from a revised $1.41 trillion in 2018. This is against the backdrop of weaker macroeconomic performance and policy uncertainty for investors, including trade tensions. 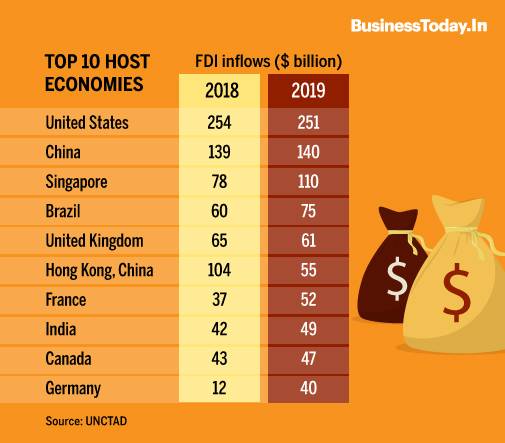 The report also revealed a slow cross-border M&A activity, which decreased by 40 per cent in 2019 to $490 billion - the lowest level since 2014. Slowed down by sluggish Eurozone growth and Brexit, European M&A sales halved to $190 billion. Deals targeting United States companies remained significant - accounting for 31 per cent of total M&As. The fall in global cross-border M&As sales was deepest in the services sector (-56 per cent to $207 billion), followed by manufacturing (-19 per cent, to $249 billion) and primary sector (-14 per cent, to $34 billion). In particular, sales of assets related to financial and insurance activities and chemicals fell sharply. The decline in M&A values was also driven by a lower number of megadeals. In 2019, there were 30 megadeals above $5 billion compared to 39 in 2018.

UNCTAD expects FDI flows to rise moderately in 2020, as current projections show the global economy to improve somewhat from its weakest performance since the global financial crisis in 2009. GDP growth, gross fixed capital formation and trade are projected to rise, both at the global level and, especially, in several large emerging markets.