The HSBC Manufacturing Purchasing Managers' Index, compiled by Markit, bounced to 51.4 in January, its highest since March, and up from 50.7 in December 2013. 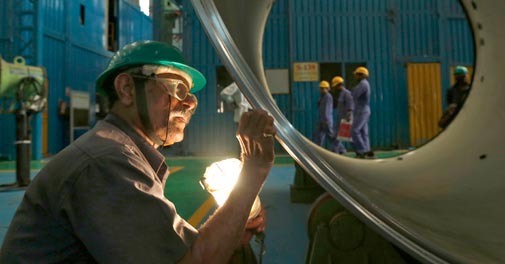 Indian factories started 2014 on a high note, with activity growing at its fastest pace in nearly a year as domestic and overseas orders increased, according to a survey that also showed inflation accelerated.

The HSBC Manufacturing Purchasing Managers' Index (PMI), compiled by Markit, bounced to 51.4 in January, its highest since March, and up from 50.7 in December 2013.

The index, which gauges business activity in Indian factories but not utilities, spent three months below the 50-mark that separates growth from contraction before rising above it in November.

A steady economic recovery in India's major export destinations of the United States and the euro zone over the past few months brought orders in at an increased pace.

After faltering late last year, the new orders sub-index rose to 52.4 last month from 51.3 in December while the pace of incoming export orders picked up for the second straight month.

That prompted firms to ramp up output last month.

The latest PMI reading may offer some relief for policymakers who have been struggling with stubbornly high inflation, government policy paralysis and fragile global demand, which put India in a rut of slowing growth.

But chances are that any respite might be short lived.

A sell-off in emerging markets in past weeks, driven by expectations of another reduction in the US Federal Reserve's asset purchases, pushed central banks in Turkey, South Africa and India to raise key benchmark rates in surprise moves to ease pressure on their currencies and discourage capital flight.

The Reserve Bank of India (RBI) unexpectedly hiked its repo rate 25 basis points last week to 8 per cent to dampen inflation, but said the economy was now better prepared to deal with the risk of major capital outflows.

"Inflation pressures also firmed, suggesting that the RBI has to keep up its inflation guards," Eskesen said.

Consumer prices eased to a three-month low of 9.87 per cent in December while the main inflation gauge, wholesale prices, slowed to 6.16 per cent.