US Secretary of State Rex Tillerson today held talks with Foreign Minister Sushma Swaraj as part of a new effort by the Trump administration to deepen economic and strategic ties, as a way to balance China's growing clout across Asia. 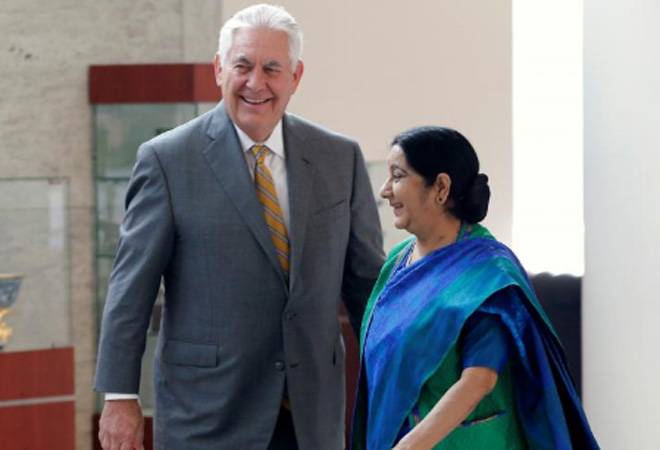 India on Wednesday told U. S. Secretary of State Rex Tillerson it plans to retain its North Korean embassy, so as to keep open channels of communication as Washington steps up global pressure to isolate Pyongyang for its nuclear and missile programmes. Tillerson held talks with Foreign Minister Sushma Swaraj as part of a new effort by the Trump administration to deepen economic and strategic ties, as a way to balance China's growing clout across Asia.

Both sides pledged to strengthen anti-terrorism cooperation and Tillerson said Washington stood ready to provide India with advanced military technologies. "The United States supports India's emergence as a leading power and will continue to contribute to Indian capabilities to provide security throughout the region," Tillerson told a joint news conference with Swaraj.

Swaraj said the issue of India's diplomatic and economic relations with North Korea came up during the talks but she conveyed to the top U.S. diplomat that some level of diplomatic presence was necessary. "As far as the question of embassy goes, our embassy there is very small, but there is in fact an embassy," she said. "I told Secretary Tillerson that some of their friendly countries should maintain embassies there so that some channels of communication are kept open."

India and North Korea maintain diplomatic offices in each other's capitals, though New Delhi recently banned trade of most goods with the country, except food or medicine. Trade was minimal, Swaraj said.

The focus on North Korea comes as U.S. President Donald Trump heads to China next month, where he is expected to urge President Xi Jinping to make good on his commitments to pressure North Korea.

Tillerson landed in New Delhi on Tuesday night after a day-trip to India's arch rival, Pakistan, which he called an important U.S. ally in the restive region that includes war-torn Afghanistan. On Wednesday, he said Washington was concerned about the stability of the Pakistan government against militant groups and that it stood with India in the fight against terror. "In the fight against terrorism the United States will stand shoulder to shoulder with India. Terrorists' safe havens will not be tolerated."

India has long blamed Pakistan for failing to act against militant groups operating from its soil, a concern shared by the United States and the Afghan government trying to fight Taliban insurgents who they say are also sheltered in northwest Pakistan.

Tillerson's visit comes a week after he made a speech in Washington about the United States wanting to "dramatically deepen" cooperation with India, which it sees as a key partner in the face of what he considers to be negative Chinese influence in Asia.

"This visit could not come at a more promising time for the U.S.-India partnership, as we celebrate the 70th anniversary of relations between our two countries and look forward to co-hosting the Global Entrepreneurship Summit in (the Indian city of) Hyderabad next month," Alice G. Wells, a senior U.S. state department official, wrote in a blogpost.

Tillerson, who toured India on several occasions as an oil executive before joining President Donald Trump's government this year, will meet Prime Minister Narendra Modi later on Wednesday. Fast-growing India is already a major market for the United States, with bilateral trade last year standing at around $115 billion, which the two countries aim to raise to $500 billion by 2022.

Singaporean passport is the most powerful in the world; India ranked 75, below Uganda, Rwanda

Reliance Communications to 'call it a day' on its 2G mobile business; cut several jobs next month