India Today Conclave 2019: Amit Shah said that Pakistan PM should have criticised Pulwama attack at least once; Nitin Gadkari says he is not in the run for Prime Minister. 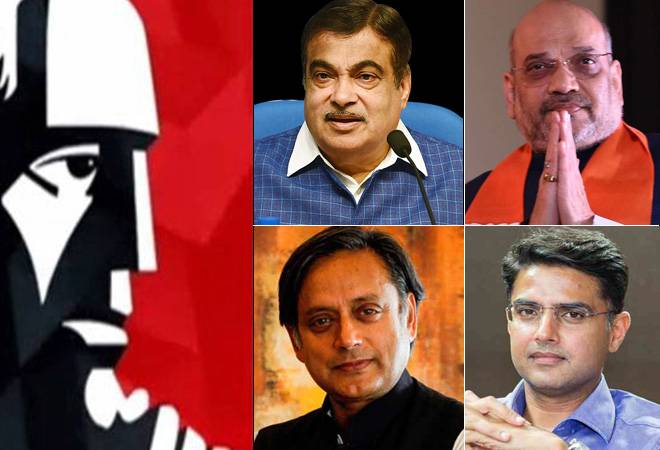 India Today is organising the Eighteen Edition of India Today Conclave on Friday 1 and Saturday March 2, 2019, at Durbar Ballroom, Taj Palace, Sardar Patel Marg, New Delhi from 9.30am onwards on Day 1 & Day 2. The who's who from the world of politics, business, science, education, sports, and entertainment world will speak at the event and discuss its theme - Hard Choice. 4:01pm: "Not doing this for vote," says Himanta Biswa Sharma about the bill.

3:57pm: Batting for the Citizenship Amendment Bill in Assam, BJP leader Himanta Biswa Sharma said that they cannot send Hindus back to Pakistan to "suffer".

3:50pm: AIMIM chief Asaduddin Owaisi said BJP is carrying on 'dog whistle politics' in Assam and added that there is obviously some reason why the party's allies are also unhappy with them.

3:35pm: "It questions that women are privy to the same pleasures as men," Rangita Nandy said.

3:32pm: "I live in a world where I take my time to explain something to you. Nasha, intoxication. In Aankhon Ki Masti is intoxication. Chaar Bottle Vodka is the other side. We all have a choice what we want to listen to and where we are going as a nation," said Ustad Shujaat Khan.

3:30pm: "Things of importance - I talk about and live in a world which is of imagination and make believe. In our world, two and two is never four. I can only bring to you my thoughts as a musician," said Ustad Shujaat Khan.

3:30pm: Producer Rangita Nandy speaks about her new show on Amazon Prime 'Four More Shots Please!' and says that she always wanted to make a show about women.

2:20pm: "Have not celebrated a single Diwali in the last five years at home, I have always been at the border," says Kiren Rijiju.

2:15pm: Kiren Rijiju extends invitation to the Northeast to everyone, adding that not seeing the region is like not seeing India.

2:10pm: People have faith in PM Modi because he makes himself accessible, said Kiren Rijiju.

2:07pm: "When your Prime Minister does not get tired, how can you?" asks BJP spokesperson Sambit Patra.

2:00pm: "For any situation the country the PM has to act appropriately. When PM Modi has shown leadership, the counry must stand united and show committment. Situation in northeast in regards to NRC is not law and order situation but political. Situations of violence has come down by 79 per cent," said Minister of State for Home Affairs Kiren Rijiju.

1:55pm: "In 2005, nobody even knew that we were the World Cup runners up. Maybe just our parents knew," said Mithali Raj.

1:51pm: "We are looked after very well by the board. These are things that affect performances," said Mithali Raj.

1:46pm: "We used to travel long distances in the economy class. But now the situation has immproved and that has helped professional sportpersons," Mithali Raj says.

1:45pm: Ace cricketer Mithali Raj said that hardships in the lives of sportswomen are reflected in their performance and that BCCI has made it easier for them.

1:42pm: Olympic medalist and champion boxer Mary Kom says the key things to her success are hardwork and focus. 1:29pm: Jyotiraditya Scindia said that when it comes to national integrity, BJP and Congress do not matter.

1:25pm: Sachin Pilot said that political discussions on the gullies and in mohallahs were more atuned to people's interests and this was what Congress was listening to.

1:20pm: Congress leader Sachin Pilot says that the 2019 Lok Sabha elections will be held in farmlands and gullies of India and pertinent questions will be asked of those who governed in the last five years.

1:15pm: Congress leader Jyotiraditya Scindia said that when the country was trying to figure out how to get Indian Air Force pilot Abhinandan Varthaman back, PM Modi was addressing a booth level meeting.

12:50pm: Shashi Tharoor said that solution to Sabarimala should be sought according to provisions in the Constitution.

12:46pm: Speaking about the issue of eating beef, Shashi Tharoor said that it should be a state issue and that consuming beef is looked upon differently across the country from a state like Kerala to Madhya Pradesh.

12:42pm: Hinduism is quite prevalent in Nehruvian politics: Shashi Tharoor.

12:32pm: Congress leader Shashi Tharoor said that Hindutva narrows Hinduism and that it ties the religion to a political ideology.

12:15pm: CVoter's Yashwant Deshmukh said that if the present situation is taken into account then the BJP is likely to come to power in the upcoming elections.

12:00pm: Yogendra Yadav said that war is being used to win the 2019 Lok Sabha Elections and that if agriculture and economy were the basis then BJP would not win the upcoming polls.

11:50am: Elections not a horse race, future of nation is at stake: Yogendra Yadav.

Speaking at the India Today Conclave 2019, politician Yogendra Yadav said that while it was important to gauge who will win the upcoming elections, he said it was equally important to note that the elections were not a horse race and the country's interests should be the primary goal of the polls.

As India gets ready for general elections in 2019, number-crunchers express their views on who might win the Battleground 2019.

11:18am: My message to youth is to focus on entrepreneurship and innovation: Nitin Gadkari.

11.10am: My quotes on Acche Din were misinterpreted by media: Nitin Gadkari.

10:52am: Dont believe in classying people into minority-majority: Amit Shah.

10:52am: Priyanka Gandhi has been in politics since 12 years: Amit Shah.

10:47am: Cases against Robert Vadra, Mayawati not registered by BJP: Amit Shah.

10:47am: Modi Government is not using CBI, said Amit Shah.

10:41am:  Gongress Government only served the Gandhis, we work for public: Amit Shah.

10:40am: Imran Khan should have criticised Pulwama attacks at least once; how can we trust him: Amit Shah.

9:50am: India under Modi govt has sent out strong message to Pakistan: Amit Shah.

09:44am: After the welcome address by Chairman and Editor in chief of the India Today Group, Aroon Purie, the first session is being addressed by BJP president Amit Shah. The BJP chief is expected to speak about party's strategy for the upcoming Lok Sabha elections.

10:07am: Speaking on heightened tensions between long standing rivals India and Pakistan, India Today Group chairman Aroon Purie said Pakistan agreeing to send back Wing Commander Abhinandan is a silver lining. He added that if Pakistan Prime Minister Imran Khan doesn't act on the evidence provided by India on Pulwama terror attack, it would justify any strong action that Prime Minister Modi may take in the coming days against terror groups including the Jaish that Pakistan harbours. Talking about Pakistan, he said, "It's an Army with a country and not the other way around." He added that Prime Minister Modi has finally called their bluff. Aroon Purie further added that Pakistan is a bonsai democracy on the brink of bankruptcy as he welcomed audience at the eighteenth edition of the India Today Conclave.

Now, after turning 18 you can exit Aadhaar, cabinet passes ordinance