"The country needs to improve [its] business environment, enhance productivity and bring back investments," said Onno Ruhl, Country Director for India at the multilateral lender. 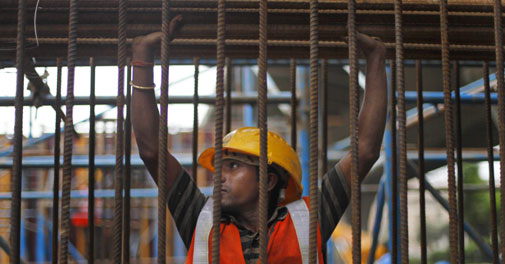 India has a unique opportunity under the new government to accelerate growth but it must improve business conditions and initiate tax reforms, a top World Bank official said on Friday.

"The country needs to improve [its] business environment, enhance productivity and bring back investments," said Onno Ruhl, Country Director for India at the multilateral lender.

Ruhl was taking to the media at the launch of a World Bank report on Global Economic Prospects 2014. A Bharatiya Janata Party-led alliance formed the government last month under Prime Minister Narendra Modi after riding to a massive victory in the April-May Lok Sabha elections.

Ruhl also said India needs to simplify its tax administration. "One major reform that will be critical for the country is the implementation of the Goods and Services Tax. There is scope to simplify business regulation and land record management at the state level," he said.

He added that India should look at benefiting from a shift in manufacturing outside China, as the South Asian nation is an ideal hub to make products that are consumed within the country and in Africa.

The World Bank report projected India's economy to expand 5.5 per cent in calendar year 2014. Growth will likely rise to 6.3 per cent and 6.6 per cent over the subsequent years, it said. "Growth in South Asia has been disappointing, and although vulnerabilities are declining, they remain," the report said.

Developing countries are headed for a third consecutive year of disappointing growth below five per cent, as first-quarter weakness in 2014 has delayed an expected pick-up in economic activity.

The report downgraded global growth forecast for 2014 from 3.2 per cent in January to 2.8 per cent. However, it expects the momentum to pick up during the year and strengthen to 3.4 per cent and 3.5 per cent in 2015 and 2016, respectively.

Rail passenger fare raised by 14.2% ahead of Budget