Indian rupee rises 46 paise to 63.38 against US dollar

The sentiment in the forex market was positive as fresh steps taken by RBI to boost foreign fund inflows and hopes of a diplomatic solution in Syria reduced the dollar's appeal as a safer investment. 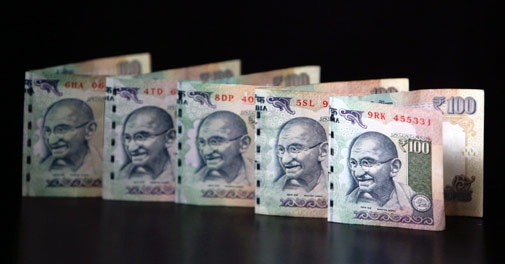 The Indian rupee gained for the fifth straight session, appreciating by 46 paise to 63.38 against the US dollar, after fresh steps by the central bank to boost foreign fund inflows and hopes of a diplomatic solution in Syria reduced the dollar's appeal as a safer investment.

The Reserve Bank of India (RBI) on Tuesday allowed swap facility for term deposits of lenders and relaxed norms for banks to borrow funds from overseas.

The rupee opened at 63.90 a dollar from the previous close of 63.84 on the Interbank Foreign Exchange Market and declined to a low of 64.20 as local stocks fell.

The local currency was also boosted by consistent capital inflows and dollar sales by exporters.

"The expectation that the Syrian crisis might not develop into a full-fledged war has led to the reduction in the safe-haven demand in the US dollar and Japanese yen. All the emerging nations currencies are seen benefiting," said Abhishek Goenka, CEO of India Forex Advisors.

Foreign institutional investors pumped in $421.15 million on Tuesday, according to data from the Securities and Exchange Board of India. The BSE Sensex ended little changed on Wednesday.

"Easing geopolitical tension in Syria is expected to stabilise global crude oil prices, which will help India to minimise the current account deficit," said Pramit Brahmbhatt, CEO of Alpari Financial Services (India). "The trading range for the spot USD-INR pair is expected to be within 62.80 to 64.30."