World Steel Association (WSA), has pegged demand growth for the next year even higher at six per cent, a significant rise as compared to 1.8 per cent in 2013. 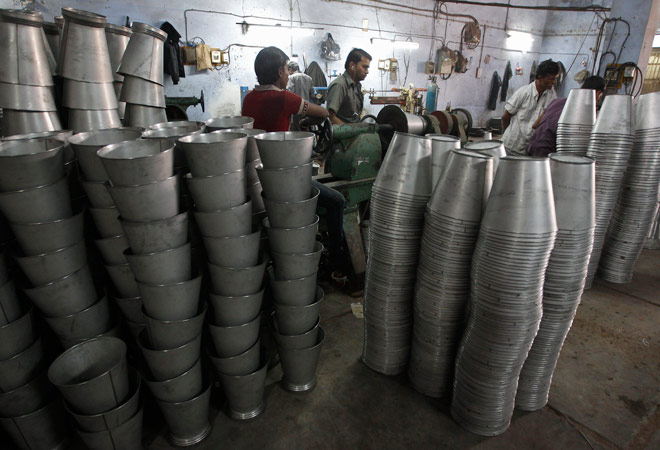 Employees work inside a steel bucket manufacturing unit at an industrial area on the outskirts of Ahmedabad on January 2, 2014. (Photo: Reuters)

Domestic steel makers, who are facing subdued offtake, have something to cheer about now as a premier global industry association has projected India's steel demand to grow at 3.4 per cent during the current year.

World Steel Association (WSA), in its short-range demand outlook, has pegged demand growth for the next year even higher at six per cent, a significant rise as compared to 1.8 per cent in 2013.

"India's outlook is improving following the election of a new government which is promising pro-business reforms. In 2014, India's steel demand is expected to grow by 3.4 per cent to 76.2 million tonnes in 2014, following a growth of 1.8 per cent in 2013," WSA said on Monday.

"In 2015, structural reforms and improving confidence will support a further six per cent growth in steel demand but elevated inflation and fiscal consolidation remain key downside risks to the outlook," it added.

In its April outlook, WSA had projected 3.3 per cent growth in steel demand for India in 2014.

Moody's Investor Service had in August said steel consumption in the country would pick up once the government's infrastructure spending policies are put in place.

Continuing with subdued consumption trend for the last couple of years, country's steel consumption grew by just 0.3 per cent to 31.17 million tonnes (MT) during the April-August period of 2014-15.

A S Firoz, Chief Economist, Joint Plant Committee (JPC), a body under the Steel Industry, recently said consumption of steel would certainly rise in India as a lot of infrastructure projects are already in the pipeline and that was why his assessment of three per cent growth was "not a tall order".

"Besides, the automotive sector is reviving which will certainly pull the demand up. Capital goods sector and lot of machinery sector have also potential to do well. So, all these will pull demand," he had said.

Construction sector accounts for around 60 per cent of the country's total steel consumption while automobile sector consumes 15 per cent. Both sectors have been plagued by a slowdown in the economy.

WSA forecasts that the global apparent steel use would, however, nearly be halved at two per cent in the current year from 3.8 per cent growth recorded last year mainly due to slowdown in Chinese demand. The growth rate for next year would remain static at two per cent in 2015 to reach at 1,594 MT. .

"The positive momentum in global steel demand seen in the second half of 2013 abated in 2014 with weaker-than-expected performance in emerging and developing economies.

"As a consequence, we are issuing a lower steel demand growth figure than our forecast released in April this year," said Hans Jurgen Kerkhoff, Chairman of Worldsteel Economics Committee.

Apart from China , there is slowdown in South America and CIS countries, but recoveries in the EU, US and Japan are expected to be stronger than previously thought, but not strong enough to offset the slowdown in emerging economies.

"In 2015, we expect steel demand growth in developed economies to moderate, while we project growth in the emerging and developing economies to pick up. In China, re-balancing will continue to act as a drag on steel demand," WSA said.