Inflation on higher side, will ease in coming months: Montek

"The comfort level of inflation is 5 to 6 per cent and if it is higher than 6 per cent, it is uncomfortable. We should keep it below 6 per cent level," the Planning Commission Deputy Chairman said. 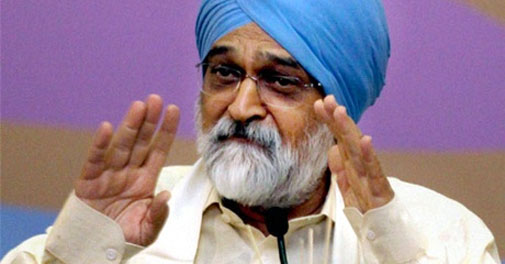 Admitting that inflation is high, Planning Commission Deputy Chairman Montek Singh Ahluwalia on Monday said it will soften in a month or so and that the prices of items like onions have already started declining.

High prices of onion along with other vegetables and fruits pushed up inflation measured in terms of Wholesale Price Index for the fourth month in a row to 6.46 per cent in September.

"I agree that inflation rate is still on the high side but it will soften in a month or so," Ahluwalia told reporters.

"The comfort level of inflation is 5 to 6 per cent and if it is higher than 6 per cent, it is uncomfortable. We should keep it below 6 per cent level," he said.

Inflation in food items, Ahluwalia said, "is mainly driven by higher prices of cereals and onions. The high price of onions is a short term problem and it is already cooling off in October. The price data for October will be significantly better."

According to the Deputy Chairman of Planning Commission, the steps taken by government to destock the excess food stocks would result in cooling off of prices in few weeks ahead.

"Government has put in place a mechanism using some of food stock to cool the prices pressure. I believe that we will see the effect of that in the weeks ahead," he said.

About higher fuel prices, Ahluwalia said "(it) reflects the fact that we are adjusting to the fuel prices internationally." He said that despite supplies being good, the prices are not easing and government should control the market prices.

"Under the Food Security Act, the prices are under control. But we should also control market prices. That requires destocking of excess food stocks," Ahluwalia said.

"The committee has been set up to suggest how and when should we do that (destock excess stock). It (the result of this move) should be visible in one or two weeks," he added.

No question of govt taking over NSEL: Chidambaram