Being interrogated in INX Media money laundering case, Karti will now be presented before the court on March 12. His bail application will be heard on March 15. 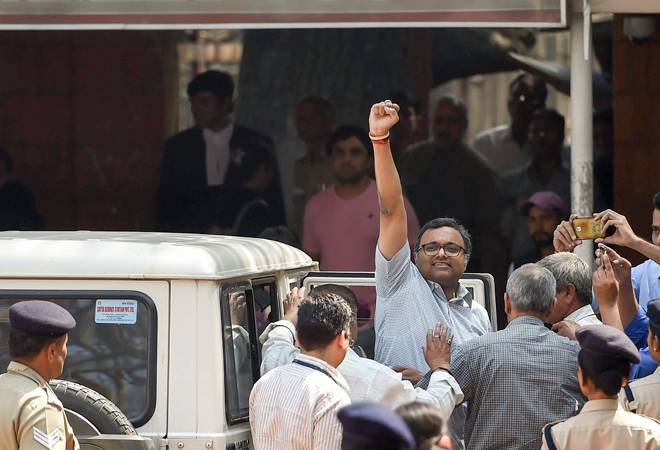 The custody of Karti Chidambaram to Central Bureau of Investigation (CBI) was extended by a special court on Friday. Being interrogated in INX Media money laundering case, Karti will now be presented before the court on March 12. His bail application will be heard on March 15.

Justice Sunil Rana extended the CBI custody when Karti, son of former Union Minister P Chidambaram, was produced before the CBI special court after his last leg of custody got over on Friday. Karti and his chartered accountant will now reportedly be interrogated together.

In a brief breather earlier today, the Delhi High Court granted interim protection from arrest to Karti Chidambaram in the INX Media money laundering case. As per the court order, he cannot be arrested by the Enforcement Directorate (ED) till March 20 in the money laundering case registered against him.

The court also issued a notice and sought a response of the Centre and the ED on Karti's plea challenging the issuance of summons and proceedings initiated against him in the money laundering case. He had sought the quashing of the summons and all proceedings initiated by the ED, calling them "unreasonable, without jurisdiction, without authority of law, in colourable exercise of power and vitiated by mala fides".

The Supreme Court had allowed Karti to withdraw his writ petition against the ED summons and asked acting Chief Justice of the High Court to allocate the matter to a suitable bench for hearing. The matter was mentioned in-chamber before Justice Bhat who listed it for hearing on Friday.

Meanwhile, investigating agencies are reportedly expanding their probe against Karti beyond the INX Media and Aircel-Maxis cases. In an affidavit filed before the Supreme Court recently, the ED had mentioned that at least 54 files of Foreign Investment Promotion Board (FIPB) are being scoured inspected.

Karti Chidambaram was arrested on February 28 at the Chennai airport on his return from the UK, in connection with the FIR lodged on May 15 last year alleging irregularities in the Foreign Investment Promotion Board (FIPB) clearance to INX Media for receiving overseas funds to the tune of about Rs 305 crore in 2007 when his father was the Union finance minister. The CBI has alleged that Karti Chidambaram received Rs 10 lakh as bribe for the FIPB clearance

The ED had registered a case against him and others in May last year. It had registered an enforcement case investigation report (ECIR), against the accused named in the CBI complaint. These accused included Karti Chidambaram, INX Media and its directors, Peter and Indrani Mukerjea.

Uber ropes in Virat Kohli as brand ambassador in India