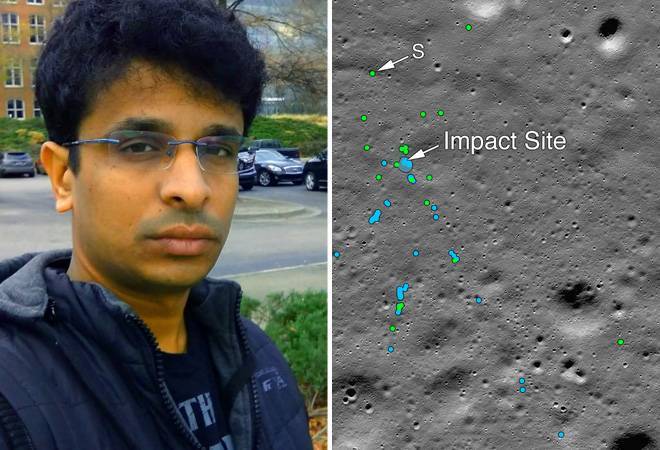 Ten months after ISRO's failed attempt to soft land Chandrayaan-2's 'Vikram' lander safely, there is still possibility of the rover rolling out of the lander when it impacted the moon surface. Shanmuga Subramanian, a Chennai-based techie and space enthusiast who found the debris of India's moonlander last year, has claimed that Chandrayaan-2's rover Pragyan seems to be intact on the moon's surface and had rolled out a few meters from the lander.

"Chandrayaan-2's Pragyan "ROVER" intact on Moon's surface & has rolled out few metres from the skeleton Vikram lander whose payloads got disintegrated due to rough landing," Subramanian said in a series of tweets along with the pictures of the moon surface.

Chandrayaan2's Pragyan "ROVER" intact on Moon's surface & has rolled out few metres from the skeleton Vikram lander whose payloads got disintegrated due to rough landing | More details in below tweets @isro#Chandrayaan2#VikramLander#PragyanRover (1/4) pic.twitter.com/iKSHntsK1f

Sharing a picture taken by NASA's Lunar Reconnaissance Orbital (LRO), Shanmugam said the white dot might be the skeleton lander devoid of other payloads and the black dot might be the rover. He opined that Vikram Lander Might have still Landed, but not in one piece.

Also Read: Chandrayaan 2: Not ISRO or NASA, it's techie from Chennai who found Vikram lander on Moon

He said the debris he had found earlier might be from one of the payloads. The debris found by NASA might be from other payloads, antenna, retro braking engines, solar panels on the side, he said in another tweet.

Commenting on Chennai techie's claim, ISRO chairman K. Sivan reportedly said that the space agency has received communication from Subramanian. Our experts are analysing the same, he said.

The Chandrayaan-2 mission was India's first attempt to land on the lunar surface. ISRO had planned the landing on the South Pole of the lunar surface. However, the lander Vikram hard-landed in September last year. Its orbiter, which is still in the lunar orbit, has a mission life of seven years. ISRO officials had earlier said it would be used for the third lunar mission as well.