Can ISRO pull off GSLV-D5 launch this time?

After several setbacks in its attempt to master the cryogenic rocket technology, the Indian Space Research Organisation (ISRO) is finally set to launch a Geosynchronous Satellite Launch Vehicle (GSLV) with an indigenous cryogenic engine. The launch of the GSLV-D5 will take place at 4.18 pm on January 5 and the 29-hour countdown will begin a day before. 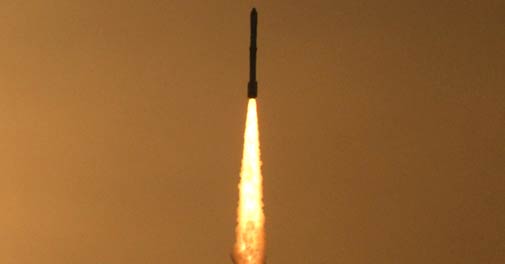 After several setbacks in its attempt to master the cryogenic rocket technology, the Indian Space Research Organisation (ISRO) is finally set to launch a Geosynchronous Satellite Launch Vehicle (GSLV) with an indigenous cryogenic engine. The launch of the GSLV-D5 will take place at 4.18 pm on January 5 and the 29-hour countdown will begin a day before.

The mission was cleared after final checks on Thursday. The 49-meter tall GSLV-D5, which weighs 414 tonnes, has been moved to the launch pad at ISRO's space port on the east coast in Sriharikota, some 90 minutes drive from Chennai. The GSLV-D5 will attempt to put in orbit GSAT-14, an advanced communication satellite weighing almost two tonnes. If successful, ISRO will cross a crucial threshold and overcome the technology barrier to put in orbit heavy communication satellites.

A similar attempt by ISRO on August 19 was aborted minutes before the launch after liquid fuel leaked from the second stage of the launch vehicle, raising quality issues in the space agency's processes. ISRO has replaced the second stage fully and the propellant tank has been made with a different aluminium alloy. The first stage and the strap on motors, which bore the brunt of the leaked fuel, are also new.

The global satellite launch market is large and satellites of varying sizes are launched depending on the tasks they are expected to perform. Remote sensing satellites are lighter and are placed in polar orbits (orbits where satellites do not move in tandem with the earth's rotation and so are not suitable for communication purposes). These satellites weigh from a few hundred kilograms to about a tonne. On the other hand, communication satellites are typically heavier weighing between two and five tonnes. And they are placed in geosynchronous transfer orbits where the satellite moves in tandem with the earth's rotation and so the service of the satellite is available for users throughout the day.

ISRO has mastered the art of putting smaller satellites in space. Its Polar Satellite Launch Vehicle (PSLV) has had 23 consecutive successful launches and has put 63 satellites in precise orbits (23 Indian and 35 foreign satellites). The PSLV's cost efficiency and reliability has been clearly established in this segment.

But the same cannot be said about ISRO's credentials in launching heavier communication satellites, which is where big business is. ISRO's attempts to break into that market with the GSLV has been met with repeated failures - both technological and operational. The critical element of the GSLV is the cryogenic engine, an engine that is powered by liquid hydrogen and liquid oxygen stored at very low temperatures. India had initially tied up with Russia for the supply of these engines and got seven of them in the 1990s. But the US objected to this deal on the grounds that it violated the Missile Technology Control Regime. This left ISRO with no choice but to develop the engine on its own (of course, with some Russian help). Besides the US and Russia, Japan, China and the European Space Agency have overcome this technology barrier.

Mastering the cryogenic technology has proved to be a tough challenge for ISRO over the past decade. It has so far attempted seven GSLV launches (six with Russian cryogenic engines and one with the engine it developed on its own) and four of them failed. What is worrisome is that in each instance the failure was for a different reason - fabrication issues, quality issues and the failure of the locally developed cryogenic engine itself. GSLV-D3, which carried the indigenous cryogenic engine, blew up in the sky, sending a clear message that mastering the cryogenic technology is a pre-requisite for ISRO to dream of any meaningful presence in the global satellite launch business. In the meantime, ISRO continued to use the services of the European Space Agency to launch its heavier communication satellites under the INSAT series.

After the failure of the GSLV-D3 in April 2010, ISRO went back to the drawing board and revisited the entire design of the GSLV apart from the indigenous cryogenic engine. Having learnt from the failures of previous launches, extensive testing and large-scale modifications have been made in the GSLV-D5. According to senior ISRO officials, the changes include a redesign of the shroud portion of the launch vehicle to protect the cryogenic engine better, reinforcement of the wire tunnel to withstand higher pressure, improvement to the aerodynamic characteristics of the launch vehicle and re-designing of the fuel booster turbo pump (whose failure caused one of the earlier failures).

Most importantly, ISRO for the first time has performed high-altitude testing for the ignition of the cryogenic engine by simulating vacuum conditions on the ground. This, according to an ISRO official, is a critical element of the preparation. Until now, ISRO did not have facilities to conduct this test. But on August 19 the fuel leak in the second stage and the consequent aborting of the launch meant that the cryogenic stage remained untested. The same stage will be used on Sunday.

If the GSLV-D5 finally lifts off on Sunday and places GSAT-14 in its intended orbit, ISRO will finally overcome its jinx with the advanced cryogenic technology and announce to the world that it is all set to enter the lucrative communication satellite launch market with a distinct cost advantage.

Timeline of the AgustaWestland Chopper deal