Prime Ministers Narendra Modi and Shinzo Abe are also likely to agree to speed up talks on a nuclear energy pact, the Nikkei business daily said. 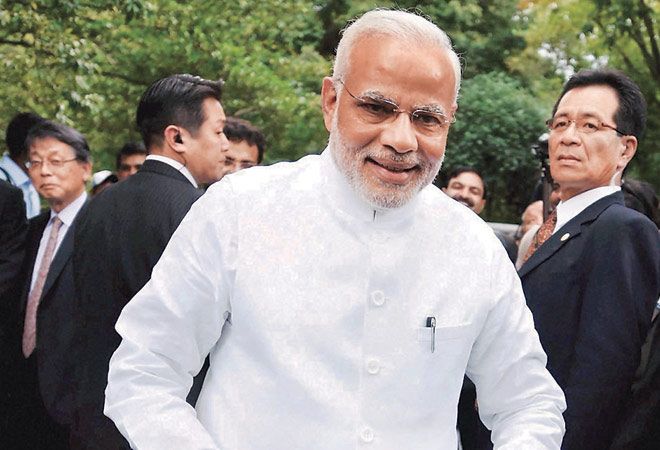 Japanese Prime Minister Shinzo Abe will tell his Indian counterpart Narendra Modi at a summit on Monday that Japan aims to double its direct investment in India in five years from some $2 billion last year, the Nikkei business daily reported.

PM Modi, on his first major foreign visit since a landslide election win in May, arrived in Tokyo on Saturday for a five-day trip aimed at capitalising on a personal affinity with Abe to bolster security and business ties in the face of an assertive China.

The two leaders are also likely to agree to speed up talks on a nuclear energy pact, the Nikkei said, although hopes of striking a similar accord to one reached with the United States in 2008 had faded in the run-up to the visit.

Japan wants explicit guarantees from India, which has not signed the nuclear non-proliferation treaty, to limit atomic tests and allow closer inspection of its facilities to ensure that spent fuel is not used to make bombs. Japanese firms also want clarity on nuclear disaster compensation, especially in the wake of the March 2011 Fukushima catastrophe.

In a sign of their close ties, the two leaders greeted each other with a bear hug when they met on Saturday in Japan's ancient capital of Kyoto for an informal dinner. Modi is one of three people that Abe follows on Twitter, while the Indian leader admires Abe's brand of nationalist politics.

Also under discussion will be a proposal to formalise a 'two-plus-two' format for talks bringing together the foreign and defence ministers of both countries, and the possible sale of an amphibious aircraft to the India navy.

India and Japan will also likely agree to hold regular joint training exercises in maritime defense, some of which will involve the United States as well, the Nikkei said.

India, Asia's third-largest economy after China and Japan, needs faster economic growth to create work for the one million young people who enter the workforce every month.

In early steps, the country's prime minister has allowed foreign investors to own 100 per cent of railway projects with an eye to drumming up interest in building India's answer to Japan's high-speed 'bullet' trains. He is also courting Japanese investment in an ambitious industrial "corridor" to run between Delhi and Mumbai.