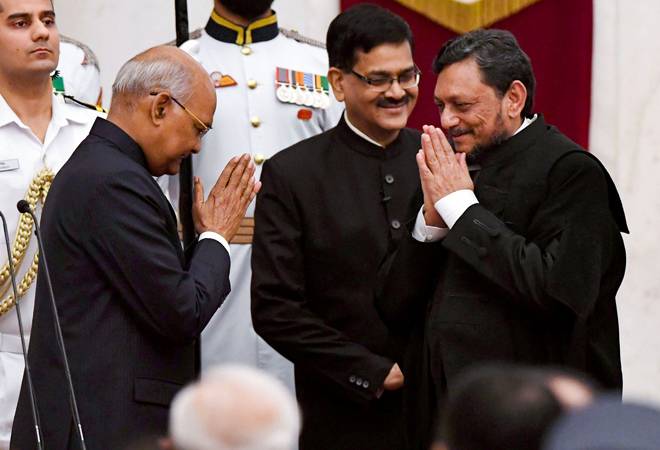 Justice Sharad Arvind Bobde, who was part of the historic Ayodhya verdict earlier this month, was on Monday administered oath as the 47th Chief Justice of India by President Ram Nath Kovind and started holding court at 11:30 am. Bobde, 63, succeeds Justice Ranjan Gogoi who demitted office on Sunday. He took oath in English in the name of God at a brief ceremony held at the Durbar Hall of the Rashtrapati Bhavan.

Soon after taking the oath, he sought the blessings of his mother by touching her feet. She was brought to the president house on a stretcher.

Former CJI Gogoi walked up to Union ministers and senior political leaders at the gathering and shook hands with them.

In an unprecedented gesture, the newly-appointed CJI shared the dais in a packed courtroom with Chief Justice of Jamaica Justice Bryan Sykes and senior-most judge of the Bhutan Supreme Court Justice Kuenlay Tshering.

Justice Bobde was chosen following the rule of seniority and his name was recommended by Justice Gogoi in a letter to the Centre. Hailing from a family of lawyers from Maharashtra, he is the son of eminent senior advocate Arvind Shriniwas Bobde. Bobde was congratulated by senior advocate and Supreme Court Bar Association president Rakesh Khanna, among others, in the courtroom where the newly-appointed CJI's relatives and friends were also present.

In an interview to PTI after being appointed as CJI last month, Bobde had said people's reputation cannot be sacrificed just to satisfy the desire of citizens to know. He had also said that he would prefer a conservative approach on the issue of disclosing the Collegium's entire deliberations on rejection of names for appointment in the higher judiciary.

On the issue of huge vacancies of judges in courts across the country and lack of judicial infrastructure, Justice Bobde had said that he wishes to take to the "logical end" the steps taken by his predecessor Gogoi.

Born on April 24, 1956 in Nagpur in Maharashtra, he was part of the five-judge Constitution bench that rendered a unanimous verdict to put the curtains down on the vexatious Ayodhya land dispute which was pending in courts since 1950.

Bobde was also part of a nine-judge bench of the Supreme Court that had held unanimously in August 2017 that the Right to Privacy was a constitutionally protected fundamental right in India. The CJI then was J S Khehar.

Justice Bobde was part of the three-judge bench which in 2015 clarified that no citizen of India without an Aadhaar card can be denied basic services and government services.

Recently, a two-judge bench headed by Justice Bobde directed the Committee of Administrators (CoA) headed by former Comptroller and Auditor General (CAG) Vinod Rai, appointed by it for the purpose of running the BCCI administration, to demit office paving the way for elected members to run the affairs of the cricket board.

He also headed a three-member in-house committee which gave a clean chit to former CJI Gogoi on a sexual harassment complaint against him by a former apex court staffer. The committee also included justices Indira Banerjee and Indu Malhotra.

Justice Bobde completed Bachelor of Arts and LLB degrees from Nagpur University. He was enrolled as an advocate of the Bar Council of Maharashtra in 1978. He practised law at the Nagpur Bench of the Bombay High Court with appearances at Bombay before the Principal Seat and before the Supreme Court for over 21 years. Bobde was designated as senior advocate in 1998.