The CM met the PM in a one-on-one meeting, as well as his accompanying ministers, including Defence Minister Harjit Singh Sajjan. 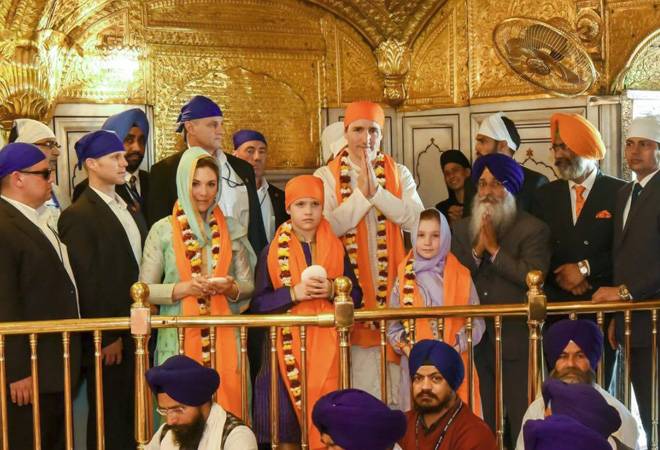 Justin Trudeau might not have been received at the airport with PM Modi's hearty hug that is otherwise reserved for every world leader but that does not mean that the Canadian PM's India visit has altogether been devoid of any warmth. Take the case of Punjab CM Amarinder Singh, for instance who met Justin Trudeau today, overlooking past animosity.

The CM welcomed the PM with warmth and had a one-on-one meeting with him, as well as his accompanying ministers, including Defence Minister Harjit Singh Sajjan. As mentioned in a report by Hindustan Times, Trudeau was scheduled to leave for Delhi at 1:15 pm, but the Singh-Trudeau meeting ended two hours later. Trudeau is said to have visited the Indo-Pak Partition Museum as well.

Before heading off to meet Amarinder Singh, Trudeau visited the Golden Temple. Trudeau was accompanied by Navjot Singh Sidhu and Hardeep Singh Puri at the temple. The Canadian PM performed sewa and prepared rotis inside the Langar Hall, before moving on to perform a parikrama.

While UP CM Yogi Adityanath did not receive Trudeau when he was in the state, in a tweet yesterday Punjab CM Amarinder Singh showed he would not follow suit and said that he hopes that meeting Trudeau would not only enhance the relation between both the countries but also strengthen the people-to-people relations between the two countries.

The meeting with Singh was a crucial one because of Trudeau's stand on the Sikh separatist movement - which has also been speculated to be the reason behind the Modi government's cold shoulder. Unlike this time, Amarinder Singh had earlier last year refused to meet Canadian Defence Minister Sajjan saying he would not meet any Khalistani sympathisers.

The government's snub - though no protocol was broken - has made obvious its discomfort on Trudeau's less-than-ambiguous support for the Khalistan movement. His attending a Khalsa Day event in Toronto, where Khalistan flags and the portrait of former Khalistani militant leader Jarnail Singh Bhindranwale were displayed, was not taken lightly. Then, last year, the Ontario Assembly, dominated by Trudeau's Liberal Party, passed a resolution condemning the 'genocide' of Sikhs in India in 1984. Meanwhile, Canada's High Commissioner to India had to apologise after India reacted sharply when a former CRPF officer was initially denied entry at Vancouver airport on the grounds that he had served a government that engaged in "terrorism, systematic or gross human rights violations, or genocide".

And now, three years later, things seem to have changed quite a bit, if only to woo the Indian diaspora with an eye on the federal elections coming up in Canada next year. "We of course reject violence and hate speech. But at the same time let me assure that my position, Canada's position, has not changed. We support one, united India," Trudeau said at an event in Mumbai. The Canadian MPs who have accompanied Trudeau on this visit are also on the same page and have said that they believe in a "united India".

The Canadian PM also spent an evening with celebrities from the film industry and top business leaders, as well as the Maharashtra CM Devendra Fadnavis in Mumbai. According to reports, this was part of Canada's efforts to lure more Bollywood film productions into their country. Trudeau met Shah Rukh Khan, Aamir Khan, Farhan Akhtar, R Madhavan among others.

The Canadian PM is scheduled to meet his Indian counterpart on February 23, where both the leaders are expected to talk about defence and counter-terrorism cooperation.