Prime Minister Narendra Modi on Friday visited flood-ravaged Kerala and announced an immediate financial assistance of Rs 500 crore. He also announced an ex-gratia of Rs 2 lakh per person to the next of kin of the deceased and Rs 50,000 to those seriously injured. 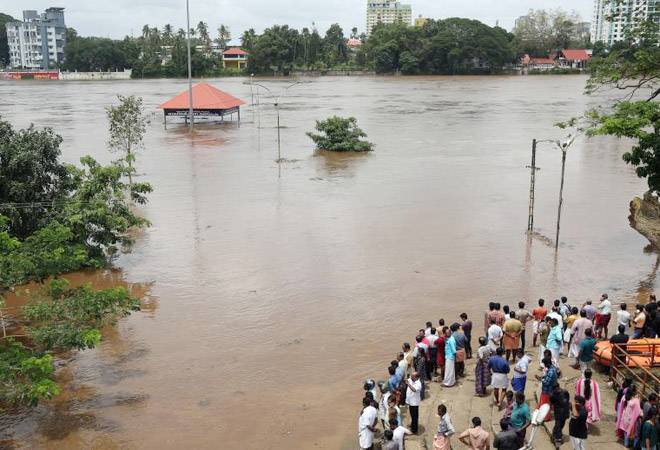 About 357 people have lost their lives in what could be called the worst-ever flood in a century in Kerala. So far, the National Disaster Response Force has evacuated over 10,000 people from the worst-affected areas of southern state. In an unprecedented relief effort under the instructions of Prime Minister Narendra Modi, 67 helicopters, 24 aircraft, 548 motorboats and thousands of rescue personnel from Indian Navy, Army, Air Force, National Disaster Response Force, Coast Guard, other Central Armed Police Forces have been pressed into service to rescue and evacuate people from submerged areas to relief camps and for distribution of relief materials.

A total of 169 NDRF teams have been deputed to rescue stranded people across the state. This is NDRF's biggest-ever relief and rescue operation in the country till date. Till yesterday, the NDRF teams were operational in Thrissur, Pathanamthitta, Alappuzha, Ernakulum, Idukki, Mallapuram, Wayanad and Kozhikode.

Prime Minister Narendra Modi on Friday visited flood-ravaged Kerala and announced an immediate financial assistance of Rs 500 crore. He also announced an ex-gratia of Rs 2 lakh per person to the next of kin of the deceased and Rs 50,000 to those seriously injured from the Prime Minister's National Relief Fund.

The Prime Minister directed the National Highways Authority of India to repair the main national highways damaged due to the floods on a priority basis . The central public sector undertaking like the NTPC and the PGCIL have been asked to render all possible assistance to the state government in restoring power lines. Villagers, whose 'kutcha' houses have been destroyed in the floods, would be provided the Pradhan Mantri Awas Yojana-Gramin homes on a priority basis.

Under the Mahatma Gandhi National Rural Employment Gurantee scheme 5.5 crore person days have been sanctioned in the labour budget 2018-19. Any further request for incurring the person days would be considered as per the requirement projected by the state. Under the Mission for the Integrated Development of Horticulture, farmers would be provided assistance for replantation of damaged horticulture crops.

Insurance companies have been asked to hold special camps for assessment and timely release of compensation to the affected families and beneficiaries under social security schemes. Directions have also been issued for early clearance of claims under the Fasal Bima Yojana to agriculturists.

The Centre on Saturday said the Cochin Naval Base would be thrown open for commercial flight operations from the morning of August 20-a move that will bring a huge relief to people awaiting resumption of air service from Kochi. The main Kochi international airport was closed from August 14 to August 26. As a result, both domestic and international flights to Kochi are being diverted to other destinations such as Trivendrum and Calicut.

Informing about the move, Civil Aviation Minister Suresh Prabhu in a tweet said: "In view of disruption of flights from Cochin airport due to floods, a joint team sent by @MoCA_GoI has approved starting of scheduled commercial flights using ATRs by Alliance Air, a subsidiary of Air India, between Bangalore and Cochin Naval Air base." In another tweet, he said, "flight operations between Bangalore and Cochin Naval airbase will be starting from 20th August morning."