While the government is taking various steps to contain this outbreak by imposing restrictions, the impact is getting visible in the declining all-India labour participation rate The country has already reported 360 confirmed COVID-19 cases and the number is rising every day. The total deaths due to the deadly virus have touched seven. While the government is taking various steps to contain this outbreak by imposing restrictions, the impact is getting visible in the declining all-India labour participation rate (LPR) which has touched the second lowest on March 21 at 42.24 per cent, based on the daily data available since 2016.

As the per the CMIE survey on employment and unemployment, labour participation touched its lowest daily rate of 42.22 per cent on November 27, 2019. This daily data is trailing 30-day average. On January 30, the country reported its first confirmed case of coronavirus and since then the labour participation rate has plummeted on 25 of the total 52 days. The LPR in urban areas during this period has touched its lowest and has fallen by 0.72 percentage points - it has fallen on 29 occasions. In rural areas though the LPR tested its lowest on March 9, but fell a little further by 0.79 percentage points between January 30 and March 21. 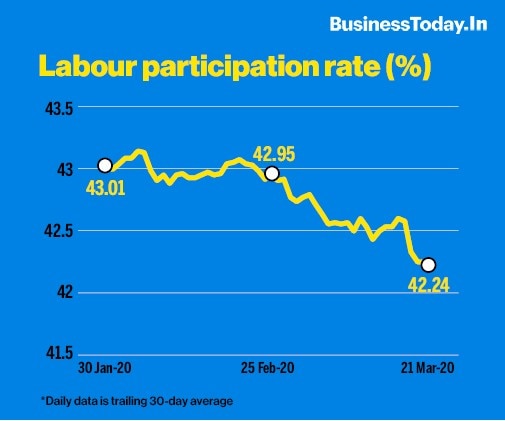 Chief secretaries of all the states, during a high-level meeting called by the Cabinet Secretary today, decided to extend restrictions on the movement of non-essential passenger transport, including interstate transport buses till March 31. It also decided to allow only essential services to operate in the 75 districts of the country till March 31 in wake of the coronavirus outbreak in India.