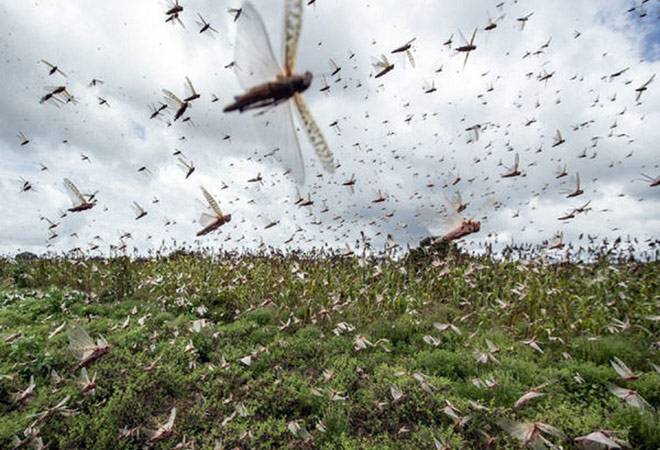 Stepping up efforts to control the spread of crop-damaging locust swarms mostly prevalent in northern India, the Union Agriculture Ministry on Thursday said that 15 sprayers will be procured from the UK in a fortnight and plans are afoot to deploy drones and helicopters for the aerial spray of pesticides.

There was no information of entry of any new locust swarm on Thursday from Indo-Pak border areas, Agriculture Minister Narendra Singh Tomar said, adding that control measures are in full swing in close coordination with state agriculture departments, local administration and Border Security Force (BSF).

As on date, there are some active swarms of immature locusts in Barmer, Jodhpur, Nagaur, Bikaner, Suratgarh, Dausa districts of Rajasthan, Jhansi district of Uttar Pradesh and Rewa, Morena, Betul, Khandwa districts of Madhya Pradesh and Nagpur and Amravati districts of Maharashtra for which the control operations are in progress, the Agriculture Ministry said in a statement. Reviewing the locust control operation with Agriculture Ministry officials here, Tomar said, "The government is concerned about the issue and is dealing urgently with the situation."

The Centre is in close touch with the affected states of Rajasthan, Punjab, Gujarat, Madhya Pradesh, Uttar Pradesh and Maharashtra and an advisory has been issued, he said. To ensure adequate machines are made available to states for effective control of the swarms, the minister said, "15 sprayers will start arriving from Britain in the next 15 days. Besides, 45 more sprayers will be procured in a month or one-and-a-half months."

"Drones will be used to spray pesticides on tall trees and inaccessible places for effective control of locusts, while plans are afoot to deploy helicopters for aerial spray." Already, two firms have been finalized through tender for use of the drones for spraying pesticides, he added.

A committee under the chairmanship of the Additional Secretary of the Agriculture Department has been constituted to procure services and goods for spraying insecticides through drones and airplanes. Tomar further said 11 Regional Control Rooms have been established and special contingents have been deployed along with additional manpower to check the spread of locusts.

"He assured the affected states will be allocated additional resources and financial aid if required," the statement said. Meanwhile, the Union Agriculture Ministry said that supply order for procurement of additional 55 vehicles has been placed to strengthen the control potential. Adequate stock of pesticide is being maintained (53,000 litres Malathion) with Locust Control Organizations.

According to the Ministry, there was no new entry of locust swarm on Thursday but on May 26 a locust swarm had entered from Sri Ganganagar district of Rajasthan and control operation was going on against these swarms. Agriculture Secretary Sanjay Agarwal said currently 47 spray equipment in Locust Control Offices (LCOs) are being used for locust control and 200 officials are deployed.

Beyond scheduled desert areas, temporary control camps have also been set up at Jaipur, Chittorgarh, Dausa in Rajasthan; Sheopur, Neemuch, Ujjain in Madhya Pradesh and Jhansi in Uttar Pradesh for locust control. Locust has been controlled in an area of about 50,468 hectares in 334 locations in Rajasthan, Punjab, Gujarat and Madhya Pradesh.

Presently, pink swarms of immature adults are being reported in India which is very active and mobile and it is difficult to control them in one place. It takes at least 4 to 5 days of control at different locations for the complete elimination of the locust population in one flock. Enough stock of pesticides is available with the locust control organization, the statement said.