Lok Sabha election 2019: Hindu groups to double down on demands as Modi set for big win

NDA is likely to win an even bigger majority in parliament than the massive mandate it got five years ago, exit polls show 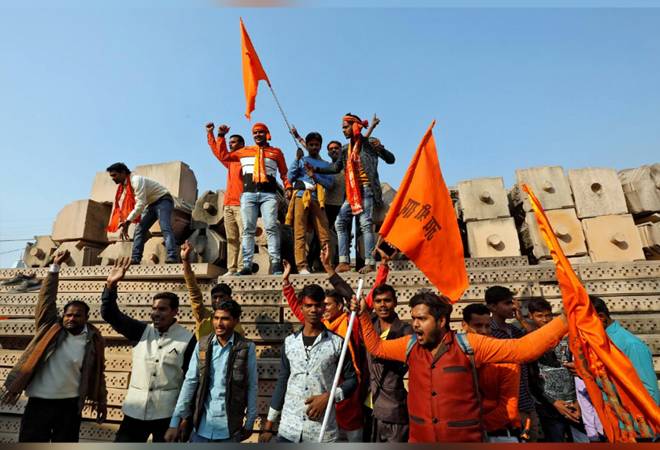 A Hindu temple on a disputed site, life in jail for killing cows and ending the autonomy of India's only Muslim-majority state are some demands Hindu groups plan to push Prime Minister Narendra Modi on if he wins the general election as expected. The ruling coalition led by Modi's Hindu nationalist Bharatiya Janata Party (BJP) is likely to win an even bigger majority in parliament than the massive mandate it got five years ago, exit polls showed after the country's massive election ended on Sunday, cheering his conservative base. Votes will be counted on Thursday. The BJP will meet its coalition partners on Tuesday to discuss a new government.

BJP parent Rashtriya Swayamsevak Sangh (RSS), the Hindu-first group, said it would hold a three-day dharm sansad, or religious parliament, in the northern city of Jammu starting June 21 to press the government on many of their main demands that had been put on the backburner around the election.  "We did not want the opposition to make it an issue against the BJP, so had stopped our agitation," Mahendra Rawat, the Delhi head for RSS, said. "The Ram temple is the biggest issue for us Hindus."

Many Hindus believe a mosque razed in 1992 was built in the same place where Lord Ram, a physical incarnation of the Hindu god Vishnu, was born. They also point to evidence there was a temple there before the mosque was built in 1528. The destruction of the mosque by a Hindu mob had led to riots that killed about 2,000 people across the country.

The BJP said in its election manifesto it would "explore all possibilities within the framework of the constitution and all necessary efforts to facilitate the expeditious construction of the Ram temple in Ayodhya". The Supreme Court this month gave a panel arbitrating the decades-long dispute until Aug. 15, raising hopes for an amicable settlement. Rawat and officials of two other RSS affiliates, the Vishva Hindu Parishad (VHP) and the Bajrang Dal, said their other main demand is the abolishment of decades-old special rights for the people of Jammu and Kashmir, a northern state dominated by Muslims in the Hindu-majority country.

The BJP has consistently advocated an end to Kashmir's special constitutional status, which prevents outsiders from buying property there, arguing that such laws have hindered its integration with the rest of India. In its election manifesto, the party also reiterated its long-held desire to abolish Kashmir's autonomous status.

Kashmiri political leaders have warned a repeal would bring widespread unrest. VHP and the Bajrang Dal said they also want the cow, considered sacred by many Hindus, to be declared a national animal whose killing would be an offence punishable with life in jail. Cow slaughter is banned in most Indian states, and many BJP-ruled states have tightened here regional laws on it in the past few years and launched a crackdown on unlicensed abattoirs in the country's most populous state, Uttar Pradesh. Penalties for killing a cow differ from state to state, with most ranging from six months to five years in prison. "We are happy with the projections for the BJP," said Bholendra, a leader of the Bajrang Dal in Uttar Pradesh, who goes by one name. "Now all attempts should be made to protect and preserve Mother Cow."