Karnataka is voting for the second time in phase 3 of the Lok Sabha Elections 2019. For the first time in over three decades, former foes Congress and JDS will field joint candidates against the BJP, making it a two-way battle. 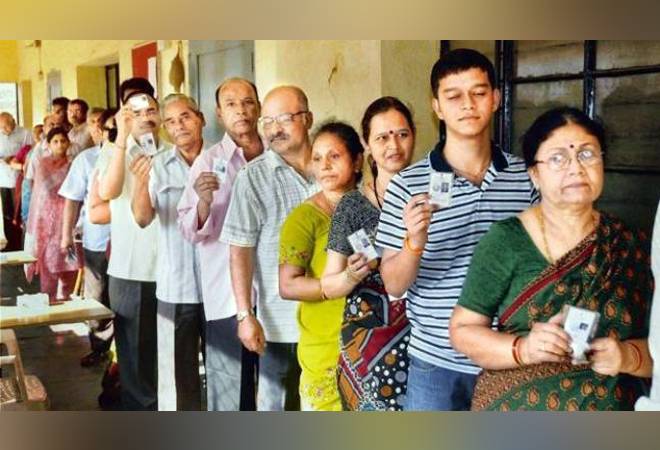 Polling for third phase of Lok Sabha Elections 2019 is set to take place today. Karnataka is one of the states where electorate will exercise their franchise from 7 am to 6 pm.

Polling for third phase of Lok Sabha Elections 2019 is set to take place today. Karnataka is one of the states where electorate will exercise their franchise from 7 am to 6 pm. According to the Election Commission of India, a total of 115 Lok Sabha constituencies across 14 states and Union Territories will vote to elect their representatives in the lower house of the parliament.

Karnataka is voting for the second time in phase 3 General Elections 2019. The remaining 14 out of 28 Lok Sabha seats in Karnataka will witness voting today.

A total of 237 candidates, out of which 9 are women, are in the fray in the state. The political parties contesting the Lok Sabha Elections 2019 in Karnataka are Congress, BJP and Janata Dal (Secular) (JDS). For the first time in over three decades, former foes Congress and JDS will field joint candidates against the BJP, making it a two-way battle.

Key constituencies in Karnataka to be watched out for during the polls include Gulbarga, where Mallikarjun Kharge is pitted against Umesh Jadhav, who ahead of polls joined the BJP quitting Congress and as MLA; and Shimogga, where former chief Minister Yeddyurappa's son B Y Raghavendra is pitted against another former chief minister S Bangarappa's son Madhu Bangarappa.

Incidentally, 1989 saw the last one-on-one electoral battle in Karnataka, where the Congress trounced JD(S). But post the BJP emerging as a major party in elections 1991, the state had veered towards a three-party system with the BJP in the clear lead since 2004.

Then, the last assembly elections in May 2018, threw up a hung house, and the BJP, despite winning 104 seats, failed to form the government. Instead, the Congress, which had won 79 seats, and JD(S), with 37, joined hands and formed a coalition government.

This post-poll arrangement has been extended to the general elections as well. The Congress and JD(S) will contest for 21 and 7 seats, respectively, India Today reported. Karnataka Pradesh Congress Committee president Dinesh Gundu Rao, for one, believes that the alliance will help bag more than 20 seats.

But given that the leaders of the two parties share little chemistry - both parties are facing trouble at the grassroots level - the big question is whether the BJP can capitalise on the fissures to increase its tally in the state.

Congress leaders in Mandya last week refused to campaign for JD(S) candidate Nikhil Kumaraswamy, son of Chief Minister H.D. Kumaraswamy. The rebellion was led by N. Cheluvarayaswamy, who had left the JD(S) for the Congress in the 2018 assembly poll.

He was caught on tape soliciting support for independent candidate and former actor Sumalatha, who the BJP is backing. While Congress leaders were unable to persuade booth-level workers to support JD(S) candidates in Hassan and Shivamogga, in Mysuru, JD(S) leaders are unwilling to support Congress's C.H. Vijayashankar.

Within the JD(S), Deve Gowda is still considered the star campaigner along with the CM, who announced several sops ahead of the polls in the southern districts. Significantly, Gowda and his grandchildren, Nikhil Gowda and Prajwal Revanna - who is making his Lok Sabha poll debut - have cornered three of the party's seven seats.

Kumaraswamy belongs to the Vokkaliga community, the second largest in the state accounting for 13 per cent of the state's 64.06 million headcount, the report added.

But the community does not enjoy any powerful representation at the national level in the NDA government, unlike the Lingayats - the single largest community in Karnataka with 17 per cent of the population.

Many Vokkaligas believe that the JD(S) represents their political aspirations, and have been supporting the party. However, the poor presence of the party in the Lok Sabha has divided the community, prompting the Vokkaligas to vote for the Congress.

They are spread across the southern, central and northern parts of the state. While in the Cauvery basin, the Vokkaligas rally behind the JD(S), it is not the same in urban areas like Bengaluru.

On the other hand, the Lingayats have aligned themselves en masse with the BJP, especially with BS Yeddyurappa heading the party in Karnataka. Last month, after the Lok Sabha election dates were announced, Yeddyurappa had declared that if BJP manages to win 22 seats in the state, he will form the government in Karnataka within 24 hours.

"The 6.5 crore citizens of Karnataka are cursing this current government to fall apart," he had added while addressing a gathering. Interestingly, the party is fielding Congress rebels from Hassan, Ballari and Kalburgi. Several of the other BJP candidates in the fray are incumbents who are expected to emerge victorious this time too.

The Lok Sabha polls are being conducted in seven phases between April 11 and May 19. Final counting of votes will take place on May 23 after all seven phases of elections are concluded and the elections results will be declared on the same date.
Tags: Lok Sabha Election 2019 | Phase 3 elections | Karnataka to vote today | Karnataka | BJP | Congress | Janata Dal Secular | JDS | Lok Sabha Constituencies | General Elections 2019 | Lok Sabha seats | Parliament

US may ask India and four others to completely end Iranian oil imports: report

SC hearing on TikTok: Why it is difficult to ban the app in India