Lok Sabha Elections 2019: The BJP has released their slogan 'Phir Ek Baar, Modi Sarkar' for the 2019 Lok Sabha election, along with the theme song and TV commercials for the poll campaign. 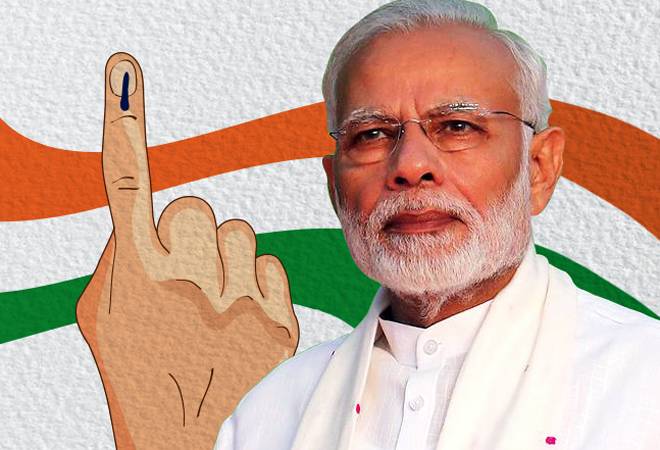 Earlier today, Samajwadi Party and Bahujan Samaj Party leaders Akhilesh Yadav and Mayawati held a rally in Deoband today. It was their first joint rally since the SP-BSP alliance was announced ahead of the elections. Yadav and Mayawati took turns to address the gathering and criticised both Congress and BJP. They said that the leading national parties remember the poor only during elections.

Meanwhile, Prime Minister Narendra Modi started off the day's campaign in West Bengal's Cooch Behar. Speaking at Mamata Banerjee's home turf, Modi criticised the West Bengal CM and said that she was the "speedbreaker" in the development of the state. The Prime Minister will also address two more rallies today - in Tripura's Udaipur and Manipur's Imphal.

5:26pm: Uttar Pradesh Chief Electoral Officer has taken cognisance of Mayawati's speech in Deoband today where she urged Muslims to vote only for the Mahagathbandhan.

5:22pm: Finance Minister Arun Jaitley slammed BSP chief Mayawati for her remarks that the Muslim community should vote only for BSP-SP-RLD alliance. Jaitley urged not to carry out political propaganda on communal lines.

5:05pm: Robert Vadra to campaign for Congress across India, starting from Uttar Pradesh. He will accompany Sonia Gandhi and Rahul Gandhi when they go to file their nominations for the 2019 Lok Sabha elections.

4:45pm: A day before releasing its manifesto for the 2019 Lok Sabha election, the BJP has released the slogan and theme song for the poll campaign. The party also released the TV commercial for the

2:40pm: Visuals from the SP-BSP rally in Deoband.

2:38pm: "The BJP party claims to be the custodian of dharma. But in Kumbh, Modi's 56 inch chest was nowhere to be found," said Akhilesh Yadav in Deoband.

2:37pm: "BJP is dividing people more than the Britishers," said Akhilesh Yadav at the SP-BSP rally.

2:35pm: "BJP should pledge not to lie again. They are making fake promises on rural electrification," said Akhilesh Yadav.

2:30pm: "There's no difference between BJP and Congress. Congress just was want to come to power in the state and is not interested in development," said Akhilesh Yadav in Deoband.

2:25pm: "They call us 'milawati gathbandhan', but they themselves are drunk on power," said Akhilesh Yadav.

2:21pm: "What happened to promises made in 2014 Lok Sabha polls," asks Akhilesh Yadav who took the stage after Mayawati at the SP-BSP rally in Deoband.

2:16pm: "The Muslim community knows that we finalised a ticket for Muslim candidate a while ago," said Mayawati.

2:15pm: "Congress trying to sway poor people by giving them Rs 6,000 per month. We will give govt jobs to people if voted to power," said Mayawati.

2:13pm: "We will win if there is no rigging," said Mayawati in Deoband at the SP-BSP rally.

2:10pm: "GST, demonetisation was launched without preparation or any planning," said Mayawati.

2:05pm: "BJP will lose even if their leaders will do their best," said Mayawati in Deoband.

2:00pm: "When Modi gets to know about the fervour of the alliance rally today, he will be scared," Mayawati in Deoband.

1:57pm: "I'm warning, especially people of Muslim community, that Congress isn't in a position to fight BJP in UP. Only 'gathbandhan' can fight BJP. Congress knows this but they're going by mantra 'Hum jeete ya na jeete, gathbandhan nahi jeetna chahiye'. Therefore, Congress party has fielded candidates from such castes & religion which will benefit BJP. Therefore I am warning members of Muslim community," said Mayawati in Deoband.

12:55pm: "In comparison to other states of the country, Odisha is lagging in water, houses, health, security for women, education and other fields. Despite being rich in resources, the people here are poor," said Amit Shah in Odisha.

12:50pm: "BJD has proved worse than Congress in Odisha. They haven't been able to live up to the expectations of the people of Odisha," said Amit Shah in Odisha.

12:45pm: "We promise that the convicts of rape will be given capital punishment. After completing 10+2 exam, exceptional students will be given two-wheelers," said Amit Shah in Odisha.

11:45am: Congress removed a couple of stanzas of their election campaign song after the Election Commission objected to the same. The EC said that these lines accused the NDA government of spreading hatred and pitting communities against one another. The Congress slogan for the elections is 'Ab hoga NYAY'.

11:36am: "The promise of 'Ma Maati Maanush' is on one hand and the truth of TMC on the other hand. Didi betrayed 'Maati' when she tried to protect infiltrators for her political benefit. When she handed over the people of West Bengal to goons of TMC, she shattered the hopes of 'Maanush'," said Modi in Cooch Behar.

11:35am: "We brought a strict law against human trafficking. If we come to power, we'd ensure its implementation in Bengal," said Modi in Cooch Behar.

11:30am: "This region is full of potential, especially tourism. The Centre has spent a lot of money on infrastructure like the Railways," said Modi in Cooch Behar.

11:25am: "People are aware of who has pocketed money from the widespread scams in West Bengal," said Modi in Cooch Behar.

11:22am: "Has Didi informed you why recommendations of 7th pay commission were not implemented? Has Didi told you why despite clearing exams no appointments are being done in Bengal?" asks Modi in Cooch Behar.

11:20am: "Didi has put a break on free treatment for the poor under Ayushman Yojana and on financial assistance to farmers,"said Modi in Cooch Behar.

11:10am: "Before 2014, terrorist used to strike every now and then. Then govt was aware of where these terrorists came from. However, they failed to take any strict action despite requests from the armed forces. Now the situation has changed entirely. We now enter the homes of the enemies and kill them," said Modi in Cooch Behar.

11:05am: "The centre approved projects worth crores for Cooch Behar. It appeared impossible but it's possible now," said Modi in Cooch Behar.

11:00am: "The chants of Modi, Modi give sleepless nights to 'speed breaker'. Didi is the speed breaker of West Bengal," said Modi in Cooch Behar.

10:45am: Priyanka Gandhi slams BJP for selective patriotism. "Whenever there is a big announcement, they add 'patriotism' to it. Is there any person in this country who is not a patriot? Everybody is a patriot. If these BJP leaders, who make tall claims, were big patriots, then they should have respected all martyrs, whether that martyr was a Hindu, Muslim or father of Opposition party leader You can't select amongst them and then pay respect. If you are a patriot then respect all the martyrs. Respect Rajiv Gandhi and Indira Gandhi too," Priyanka said at a public gathering in Uttar Pradesh's Jahanabad.

10:30am: The Election Commission of India on Saturday said the Bharatiya Janata Party's theme song composed by Asansol MP Babul Supriyo cannot be played anywhere. "Election Commission has said BJP MP Babul Supriyo's song against which TMC had objected won't be allowed to play. The song was being used by BJP in various parts of Bengal without permission. The song will have to be withdrawn," said West Bengal's Chief Electoral Officer.