With the winter session of Parliament concluding on December 22, there is not much time for the Bill to be passed. The PM is leaving for a three-day visit to Russia on Thursday.

The only sticking point in evolving a consensus on the Lokpal Bill at the all-party meeting late on Wednesday evening seemed to have been the CBI's administrative control being handed over to the proposed anticorruption ombudsman.

Prime Minister Manmohan Singh appealed to all political parties which met at his residence that every effort should be made to pass the Bill in the ongoing winter session of Parliament.

The constituents of the ruling UPA were more or less on the same page regarding various clauses of the Bill, with the government indicating that it was not averse to bringing the PM's office - a major demand of the Anna Hazare camp as well as that of the Opposition - in the ambit of the Lokpal albeit with some riders. The government was also willing to discuss the inclusion of Group C employees in the Lokpal.

The proposed Bill envisages the creation of a nine-member ombudsman which will investigate charges of corruption against government servants. It will use the CBI to conduct the probe. But how much control the Lokpal eventually has over the premier investigating agency was now the bone of contention between the government and Opposition.

PM Manmohan Singh talks to Finance Minister Pranab Mukherjee at the all-party meeting on Lokpal as Congress president Sonia Gandhi looks on.
The BJP wanted investigative independence for the agency.

For the purpose, it suggested that the CBI head should be appointed independently. "If the CBI is controlled by the government, it becomes a puppet," Leader of the Opposition in the Rajya Sabha, Arun Jaitley, said.

There could be a meeting ground on this. The government may consider mulling over the BJP's suggestion about the independent selection of the CBI chief, with the panel including the Leader of the Opposition.

The Leader of the Opposition in the Lok Sabha, Sushma Swaraj, said after Wednesday's meeting that the BJP also wanted Group C employees to be under the Lokpal's scrutiny. 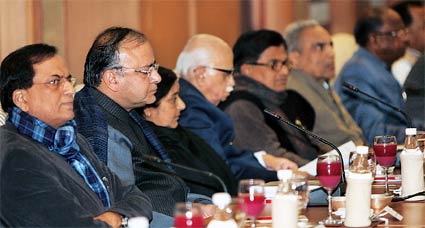 Opposition leaders, including BJP's Arun Jaitley, Sushma Swaraj and L.K. Advani, at the meeting.
Other parties that insisted on the inclusion of the PM, CBI, and Group C and D employees in the ombudsman's ambit were the BSP and those belonging to the Left.

However, the suggestions faced opposition from the very agencies they were directed at.

With the winter session of Parliament concluding on December 22, there is not much time for the Bill to be passed. The PM is leaving for a three-day visit to Russia on Thursday.

Furthermore, the Bill has to be considered again by the Union Cabinet in the light of the standing committee report and suggestions made in the all-party meeting. It was believed that after the PM's return, the Cabinet could meet again on Monday to clear the draft Bill.

Efforts were on to table it in the Lok Sabha on December 20 and within the next two working days in the Rajya Sabha. The government was also weighing the option of convening a special session in January.