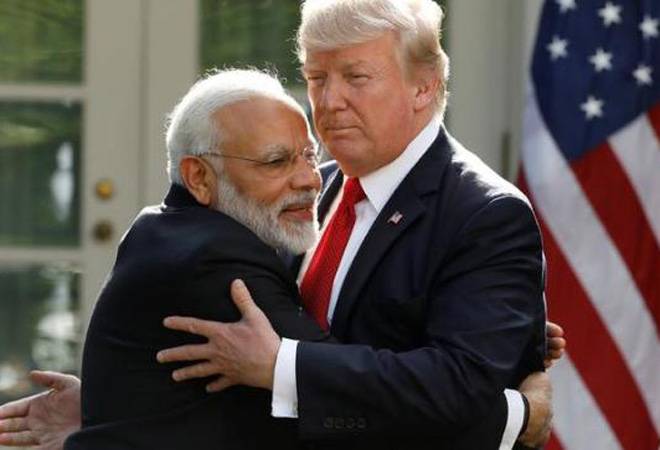 The event will shine light on the tremendous contribution of Indo-Americans in United States.

Looking forward to address 'Howdy, Modi' rally in Houston, US President Donald Trump said on Sunday that he and Prime Minister Narendra Modi will have a good time at the mega event. "We'll be going to Houston and we'll be at a very nice big stadium packed full of people with Prime Minister Modi," Trump told reporters on the South Lawns of the White House before he left for Houston, where he and Modi would address over 50,000 Indian-Americans.

"He (Modi) asked if I would go with him and I've accepted and we're going to have a good time," Trump said minutes before he boarded Marine One from the White House lawns. "I hear it's a tremendous crowd," he added.

Organised by the non-profit Texas India Forum, the event, with the tagline 'Shared Dreams, Bright Futures', will shine light on the tremendous contribution of Indo-Americans in United States and the strong and lasting partnership between the US and India.

The cultural programme preceding Prime Minister Modi's address, showcasing Indian-American artists from Texas and elsewhere, will portray how the community is woven into the larger tapestry of American life. It will involve broad-based community participation across the United States.

The 90-minute music, dance, and multimedia show features close to 400 artists and community members from Texas and across the nation. There are 27 groups performing in a live and multimedia experience that will showcase the diversity in the Indian-American community, organisers said.

"A challenge that many second and third generation Indian-Americans go through is navigating the complexity of having a hyphenated identity as an Indian and an American. Woven showcases the multiplicity of Indian-American experience. Our hope is that each person sees themselves in at least one form of expression and recognises that whatever mix of Indian and American they are, it is just right," said Heena Patel, CEO of MELA Arts Connect and co-producer of the program.

'Howdy, Modi!' - Thousands, plus Trump, due at Texas rally for PM Modi