Each non-subsidised 14.2-kg cooking gas cylinder will now cost Rs 922.50 in Delhi, up from Rs 906, according to Indian Oil Corp (IOC), the nation's largest oil firm. 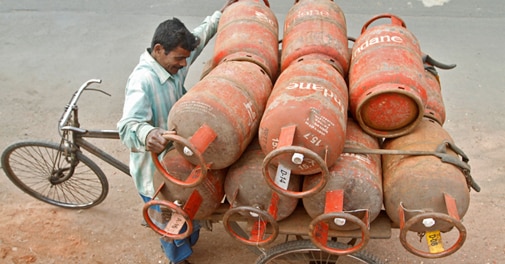 Price of non-subsidised cooking gas (LPG) was on Tuesday hiked by Rs 16.50 per cylinder and that of jet fuel by over half-a-per cent after international oil prices surged due to the ongoing Iraq crisis.

The increase in rates of non-subsidised LPG and ATF accompanies the Rs 1.69 a litre hike in petrol and 50 paisa a litre in diesel announced on Monday.

The price of non-subsidised LPG, which customers buy after using up their quota of 12 subsidised cylinders, was raised by Rs 16.50 per 14.2-kg cylinder, the first hike in six months.

Each non-subsidised 14.2-kg cooking gas cylinder will now cost Rs 922.50 in Delhi, up from Rs 906, according to Indian Oil Corp (IOC), the nation's largest oil firm.

Tuesday's hike breaks the declining trend that started in February with a Rs 107 cut in rates to Rs 1,134 per cylinder.

The increase follows three straight monthly reduction, the last one of Rs 1,285.89 per kl, or 1.81 per cent, which came into effect on June 1.

Jet fuel constitutes over 40 per cent of an airline's operating costs and the price hike will increase the financial burden of cash-strapped carriers.

No immediate comments were available from airlines on the impact of the price increase on passenger fares.

The three fuel retailers -IOC, Hindustan Petroleum Corp and Bharat Petroleum Corp-revise jet fuel and non-subsidised LPG prices on the first of every month, based on the average international prices in the preceding month.