CGO Complex fire: As many as 24 fire tenders were immediately rushed to the spot to carry out the rescue operation. 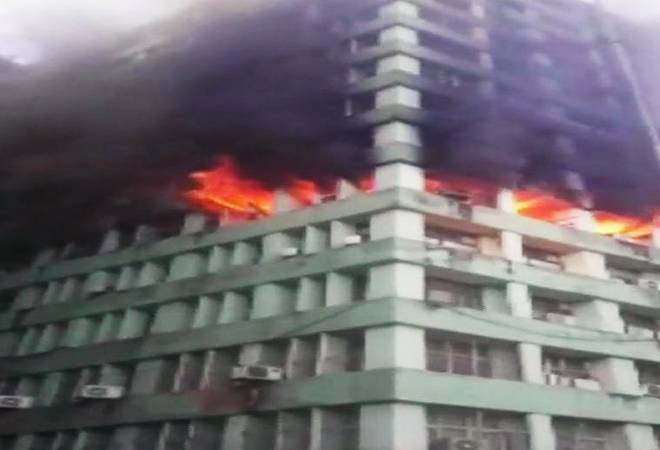 The 11-storey building houses the Ministry of Social Justice and Empowerment and Disability offices on the fifth floor. Photo: ANI

A CISF sub-inspector fell unconscious and subsequently died after a major fire broke out on the fifth floor of Pandit Deendayal Antyodaya Bhawan at CGO Complex in New Delhi on Wednesday morning. As many as 24 fire tenders were immediately rushed to the spot to carry out the rescue operation. The Fire department got a call regarding the blaze at 8:34 am. The 11-storey building houses the Ministry of Social Justice and Empowerment and Disability offices on the fifth floor. The CISF (Central Industrial Security Force) sub-inspector fell unconscious after inhaling the smoke and was taken to AIIMS, where he succumbed to his injuries, reported the news agency ANI.

#UPDATE on Delhi's CGO Complex fire: According to the fire department, CISF Inspector who got unconscious in the fire incident today has passed away

The fire has now been brought under control, and the cooling process is on. Plumes of smoke and fire can been seen billowing out from the building. Several official documents could be gutted in the fire. Offices of the drinking water and sanitation ministry, forest ministry and a branch of the Indian Air Force are located in the Pandit Deendayal Antyodaya Bhawan, previously known as Paryavaran Bhawan, reported PTI.

Delhi: Fire broke out at the office of Ministry of Social Justice and Empowerment in Pandit Deendayal Antyodaya Bhawan, at CGO Complex, today; 24 fire tenders present at the spot. #Delhipic.twitter.com/epcfEpr7eN

Several incidents of fire have been reported recently. On February 12, a massive fire had broken out at a central Delhi's hotel, Arpit Palace, killing at least 17 people, including a woman and a child.  The hotel is located near the Gurudwara road in Karol Bagh. Following the incident, the Delhi government has taken action and cancelled fire safety certificates of 71 of the 80 hotels inspected in the Karol Bagh area in the past few days. During the Aero show in Bengaluru in February 23, over 100 cars were gutted in a huge fire at the parking space of Yelahanka Air Force Station. Officials said one car suddenly caught fire, which spread uncontrollably and took around 80-100 cars in its blaze, resulting in a huge tower of smoke.