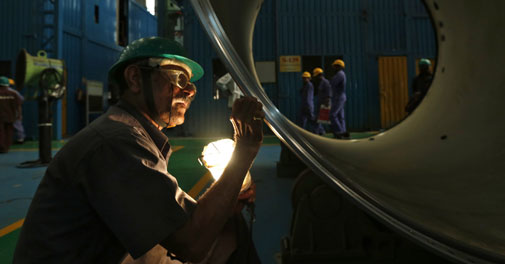 The HSBC India Manufacturing Purchasing Managers' Index (PMI), a measure of factory production, rose marginally from 51.4 in May to 51.5 in June as operating conditions improved for the eighth month in succession.

A PMI reading above 50 indicates growth while a lower reading means contraction.

June data highlighted a marked and accelerated expansion of new export orders, which hit a three month high during the month.

On price rise, the report said higher rates paid for metals, plastics, textiles, food and energy led to a further increase in average purchase prices. This rise in input costs was passed on to clients, as highlighted by a rise in output prices.

"The muted pace (of manufacturing activity) will suit the RBI: since input and output prices are rising as well, faster growth would only stoke inflation and require tightening," Neumann said.

RBI had increased the key policy rate, repo, three times since Raghuram Rajan took over as the Governor in September.

The Reserve Bank of India last month kept key interest rate unchanged at 8 per cent. However, it cut the amount of deposits banks need to park in government securities by 0.5 per cent to 22.5 per cent to improve availability of funds.

Meanwhile, for the ninth consecutive month, manufacturing employment rose in June. Those panelists reporting higher payroll numbers attributed this to the signing of new contracts.