According to official figures released on Monday, segments that recorded negative growth last month were crude oil (- 0.3 per cent), natural gas (- 2.2 per cent), refinery products (- 2.3 per cent) and steel (- 2 per cent). 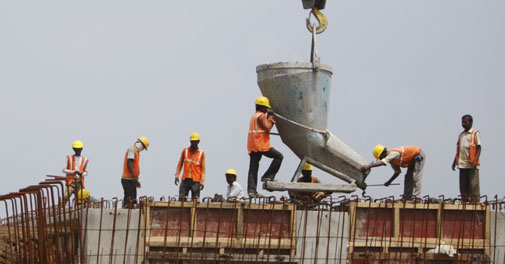 The growth rate of eight core sectors decelerated to a four-month low of 2.3 per cent in May due to decline in the output of crude oil, natural gas and steel production. The infrastructure industries had registered 5.9 per cent growth in May 2013. The growth rate in April this year was also higher at 4.2 per cent.

According to official figures released on Monday, segments that recorded negative growth last month were crude oil (- 0.3 per cent), natural gas (- 2.2 per cent), refinery products (- 2.3 per cent) and steel (- 2 per cent).

The decline in the natural gas output has also had a cascading effect on the power sector as several projects have been held up due to the lack of adequate fuel supplies.

The data, released by the ministry of commerce and industry, showed that the output of coal, fertilisers, cement and electricity went up by 5.5 per cent, 17.6 per cent, 8.7 per cent and 6.3 per cent, respectively.

During April- May, growth in the eight core industries slowed to 3.3 per cent as against 4.9 per cent in the yearago period. The growth in May was the slowest since January, when it was 1.6 per cent.

Rating agency Icra, an associate of Moody's Investors Service, said that deterioration in the performance of steel and electricity relative to the previous month was largely responsible for dip in the growth. According to the Associated Chambers of Commerce and Industry of India ( Assocham), the new government needs to initiate a comprehensive review of policies and processes that govern infrastructure industries.