In his monthly Mann Ki Baat radio address, Modi also hailed the world's largest vaccination programme being carried out in India against the COVID-19 and stressed on "dawai bhi, kadai bhi" (medicines as well as strict preventive measures) 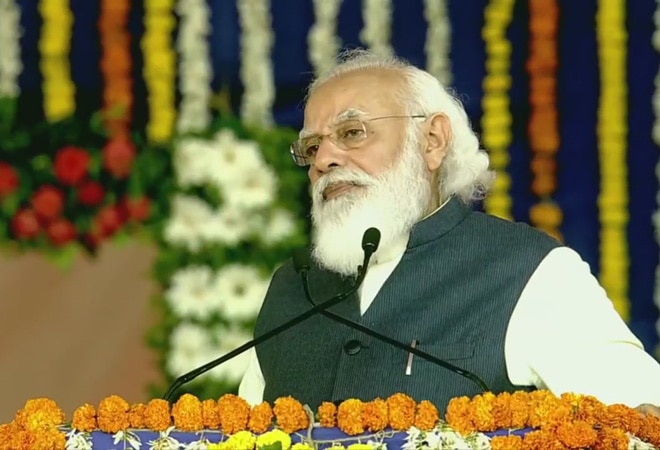 PM Modi hailed the 'taali-thaali' campaign and lighting of diyas last year, saying it had touched the hearts of 'corona warriors'

Modernisation in the agriculture sector is the need of the hour as already a lot of time has been lost, Prime Minister Narendra Modi said on Sunday.In his monthly Mann Ki Baat radio address, Modi also hailed the world's largest vaccination programme being carried out in India against the COVID-19 and stressed on "dawai bhi, kadai bhi" (medicines as well as strict preventive measures).

He hailed the 'taali-thaali' campaign and lighting of diyas last year, saying it had touched the hearts of 'corona warriors'."That is the very reason they resolutely held on the whole year, without tiring, without halting. Steadfastly, they endured to save the life of each and every citizen of the country," Modi said.

Asserting that adopting modern practices in the agriculture sector is imperative, he said in every aspect of life, newness and modernisation are essential.

"In India's agriculture sector, modernisation is the need of the hour. It has been delayed and we have already lost a lot of time," the prime minister said in his 75th episode of Mann Ki Baat.

"To create new employment opportunities in agriculture, to increase farmers' income, it is equally important to adopt new alternatives and innovations along with traditional agricultural practices," he said.

The country has witnessed this during the white revolution and bee farming is also emerging as one such alternative, he said.

The prime minister's call for embracing modern practices in agriculture comes at a time when hundreds of farmers have been camping at Delhi's border points at Ghazipur, Singhu and Tikri since November last year demanding that the Centre repeal the three contentious farm laws.

The government has maintained that these reform laws will boost farmers' income by bringing investment, modern practices and allow them to sell their produce anywhere across the country at the best prices.

Noting that bee farming is becoming the foundation of a honey revolution or sweet revolution in the country, Modi said farmers in large numbers are associating with it.

The natural organic honey of the Sundarbans areas of West Bengal is in great demand in the country and the world, he said.

Modi also cited the examples of Banaskantha, Gujarat and Yamuna Nagar, Haryana, where farmers have taken to bee farming and increased their income.

"Honey bee farming does not lead to income solely from honey, but bee wax is also a very big source of income. There is demand for bee wax in everything pharmaceuticals, food, textile and cosmetic industries," he said.

"Our country currently imports bee wax, but our farmers are now rapidly transforming this situation that is, in a way contributing in the "Atmanirbhar Bharat' campaign," he said.

During his radio broadcast, Modi also recalled that in March last year, the nation first heard about the Janata curfew.

The Janata curfew was imposed on March 22 last year on the prime minister's appeal following the coronavirus outbreak.

"From very early on, the people of India have put up a spirited fight against COVID-19," he asserted.

Noting that around this time last year, the question was whether there would be a vaccine for COVID-19 and by when would it be rolled out, Modi said it is a matter of pride that the world's largest vaccination drive is underway in India. He urged the people to take the vaccine.

"I am observing on Twitter -Facebook how after getting the vaccine for the elderly of their homes, people are uploading their pictures. A youth, Anandan Nair, from Kerala in fact has given a new term to this- "Vaccine service'," he pointed out.

Raj recently became the first Indian woman to complete 10,000 runs across formats while Sindhu finished runners-up at the Swiss Open earlier this month.

The prime minister also spoke about the success of the Indian shooters in the International Shooting Sport Federation (ISSF) World Cup.

Talking about lighthouses, Modi said India is working towards strengthening tourism facilities in some of them and appreciated the efforts of lighthouse keepers in doing their duties diligently.

"Sadly, we had lost many lighthouse keepers during the tragic 2004 Tsunami," he said.

On Mann Ki Baat completing 75 episodes, Modi said it feels like just yesterday when in 2014 "we began this journey" and thanked all the listeners.

"During Mann Ki Baat, we have discussed a wide range of subjects. We all have learnt so much. Diverse topics have been covered," he said.

Mann Ki Baat completes 75 episodes at a time when India is looking forward to marking our 'Amrut Mahotsav', Modi said underlining the importance of the celebrations of 75 years of Independence.

"The sacrifices of our great freedom fighters must inspire us to think about our duties as a citizen. This is something Mahatma Gandhi talked about extensively," he said.