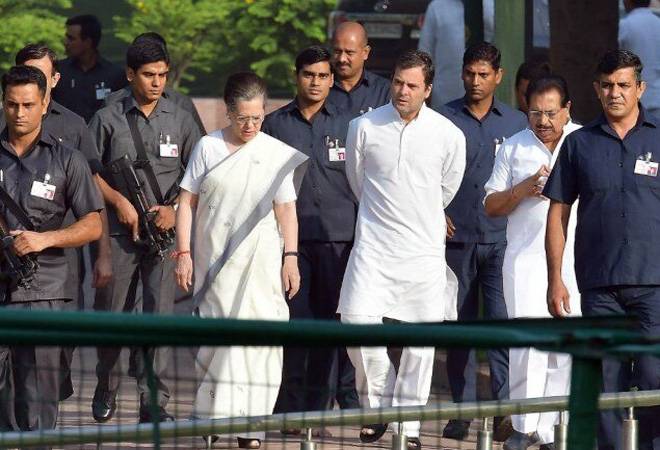 The commandos trained by the CRPF will now protect them, according to sources cited by India Today TV who also said that the decision was taken after reviewing threat inputs from security agencies.

The authorities found no direct threat to the Gandhi family, due to which the SPG security has been withdrawn.

The government had in August withdrawn former prime minister Manmohan Singh's security cover following a review by multiple security agencies. His security was downgraded from SPG to Z+.

With the removal of SPG protection to the Gandhi family, the top-notch security will now be given only to PM Modi.

Commenting on the reports, senior Congress leader Nana Patole said that the decision was a conspiracy and an ulterior motive of the RSS. "The country knows Indira Gandhi and Rajiv Gandhi made scarifices. The threat to Gandhi family is known," Patole told the news channel. He further articulated that the Congress will not let anything happen to the Gandhi family.

Congress leader Ahmed Patel tweeted, "The BJP has descended to the ultimate personal vendetta mechanism, compromising the lives of family members of 2 Former Prime Ministers to acts of terror and violence."

The BJP has descended to the ultimate personal vendetta mechanism, compromising the lives of family members of 2 Former Prime Ministers to acts of terror and violence.

The SPG was set up in 1985 after the assassination of prime minister Indira Gandhi. Parliament passed the SPG Act in 1988, dedicating the group to protecting the prime minister. At the time, the Act did not include former prime ministers. When V P Singh came to power in 1989, his government withdrew SPG protection given to his predecessor Rajiv Gandhi.

After Rajiv Gandhi's assassination in 1991, the SPG Act was amended to offer SPG protection to all former prime ministers and their families for at least 10 years.

In 2003, the Vajpayee government again amended the SPG Act to bring the period of automatic protection down from 10 years to "a period of one year from the date on which the former prime minister ceased to hold office" and beyond one year based on the level of threat as decided by the general government.