"Congress and its friends, some urban naxals are spreading rumours that all Muslims will be sent to detention centres...Respect your education, read what is Citizenship Amendment Act and NRC. You are educate," says PM 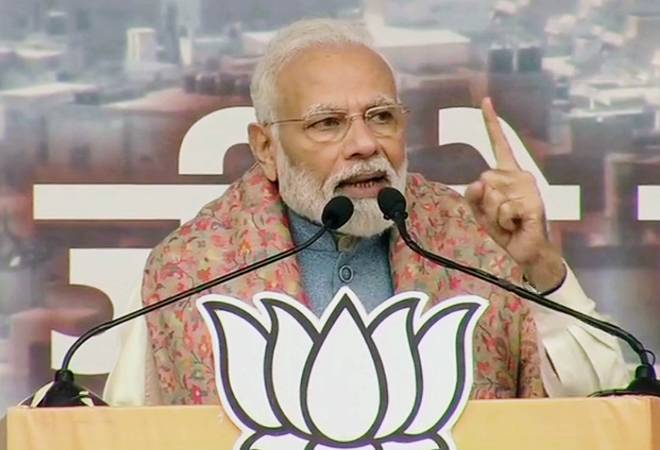 Prime Minister Narendra Modi, during his public rally in Delhi's Ramlila Maidan on Sunday, accused his rivals of stoking fears among people and misleading Muslims over the amended citizenship law. He asserted that his government had never done any discrimination on the basis of religion. The PM's election rally is being held amidst widespread protests over the Citizenship Amendment Act in several states. The Assembly elections in Delhi are scheduled to be held early next year, and all parties including the Aam Aadmi Party, BJP and Congress are trying their best gain power in the Union Territory. During his rally, the PM also handedover ownership rights to 40 lakh residents of 1,731 unauthorised colonies.

Here the timeline of all updates:

3.06 PM: "Two weeks ago, a daughter was born at Majnu-ka-tila who was named 'nagarikta'. I want to ask miscreants & people engaged in remote control politics, if lives of  'nagarikta' & her parents become easy, if problem of any citizen of country is solved, why does it pain you?," says Modi.

3.05 PM: PM Modi on Mamata: "Mamata didi went from Kolkata to UN. Few years back, she was pleading before Parliament that infiltrators coming from Bangladesh should be stopped. Didi what has happened you? Why did you change? Why are you spreading rumours? Elections come & go. Why are you scared?"

2.56 PM: "A lie is being spread that this government had brought the law to snatch people's rights, the prime minister said and dared rivals to find anything discriminatory in his work," says Modi.

2.52 PM: "There is a very simple difference, an infiltrator never reveals his identity and a refugee never hides his identity," says PM.

PM Narendra Modi: Had the Delhi govt not politicised the phase 4 project of Delhi metro, its work would have started much earlier. That is why I say that those who do politics in your name, never understood your pain, they never intended to do that. pic.twitter.com/aXvGcA1rXx

2.55 PM: PM: Congress and its friends, some urban naxals are spreading rumours that all Muslims will be sent to detention centres.

PM Narendra Modi: Had the Delhi govt not politicised the phase 4 project of Delhi metro, its work would have started much earlier. That is why I say that those who do politics in your name, never understood your pain, they never intended to do that. pic.twitter.com/aXvGcA1rXx

2.50 PM: PM Modi: "NRC came at the time of Congress. Were they sleeping then? We neither brought NRC in cabinet nor in Parliament. If we're passing a legislation to give you ownership rights, in the same session will we bring a legislation to send you out?"

2.45 PM: PM Modi: I also want to ask the Opposition parties. Why were you silent for so many years? Why you have never seen the suffering of the Dalits?

2.35 PM: Hindus, Muslims, Sikhs, Christians all were befitted from the NDA government's scheme. "Why did we do this? Because we live for the love of the country. We are dedicated to the mantra of 'Sabka saath, sabka vikas'," says Modi.

2.30 PM: These people have not only tried Delhi but also tried to push many cities of the country into chaos and fear: PM

2.16 PM: We have never asked anyone about their religion when we did welfare works like legalisation of hundreds of colonies of Delhi: Modi

2.10 PM: Some political parties are spreading rumors, confusing people, provoking emotions even after the Citizenship Amendment Act was passed by both the houses: PM

2.07 PM: "Had the Delhi govt not politicised the phase 4 project of Delhi metro, its work would have started much earlier. That is why I say that those who do politics in your name, never understood your pain, they never intended to do that," says Modi.

2.05 PM: "You should know what those people, whom you were asking for something for yourself, were doing. They had illegally given 2000 lavish bungalows to their people. No one knows what was given to whom in lieu of that," PM Narendra Modi on unauthorised colonies.

2 PM: For so many decades after independence, a large population of Delhi has had to go through fear, anxiety, uncertainty, deception and false election promises about their homes: PM

1.55 PM: Happy to bring changes in lives of over 40 lakh people of Delhi: Modi

12.20 PM: As part of the security arrangement in wake of the CAA protests, traffic police personnel have been deployed along the route to be taken by the prime minister. Senior officials will keep an eye on the social media to stop rumour-mongering.

12.02 AM: Performers from J&K will present a performance as a thank you gesture for PM Modi for revoking Article 370 in J&K.

11.00 AM: A total of 11 lakh signatures by residents of unauthorised colonies will be handed over to Modi as a "thankyou gesture".