After the third-highest rainfall in 44 years on Monday wreaked havoc in Mumbai, the IMD predicts another day of medium to heavy shower. 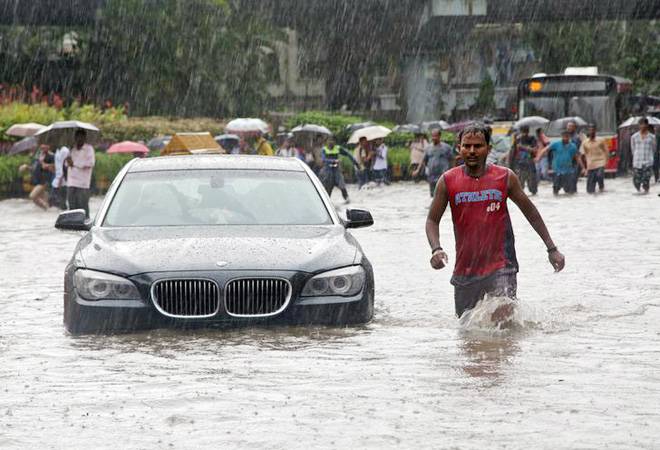 The mayhem that ensued after a strong spell of rain on Monday crippled one of the biggest cities in India. Even though Mumbai is highly affected every year because of its torrential rains, the authorities, still, seem to have zeroed in on no solution to keep the basic civic amenities running. According to the India Meteorological Department (IMD), Monday's shower at 231.4 mm was the third-highest one-day rain in the month of June in 44 years. It surpassed the average rainfall of the month to become the wettest day. According to the classification, Monday's Mumbai rain would be under the 'extreme' category.

Talking about the cause of the extreme rain, KS Hosalikar, Deputy Director Deneral, western region, IMD said, "The cyclonic circulation over North Konkan (including Mumbai) and South Gujarat was another factor. Circulation over south Gujarat and adjoining north Konkan has moved inward in north direction causing reduction in rainfall activity over north Konkan in next 24 hours," as mentioned in a report in Hindustan Times.

As measure by the IMD's automatic weather stations, Panvel recorded the highest rainfall at 94.20mm, followed by Nerul with 83.40 mm, Mulund east with 82.20 mm and Bhadup west with 80 mm. Temperature also fell to up to 3 degrees in the city.

Meanwhile, not only a breakdown of civic amenities, things took a much grimmer turn as 10 lives were claimed in Mumbai since Sunday night including a five-year-old boy and an eight-year-old boy. Severe waterlogging across the city also crippled road and rail traffic. More than 140 trains were cancelled on Monday on both Central and Western Railway. In Lloyd Estate, a compound wall and the driveway caved in.

The Mumbai Police and the traffic department kept issuing advisories through their Twitter handles to assist people to reach their destinations safely.

As the IMD predicts another rainy day in Mumbai, here are the updates to follow:

12:08 pm - Doing one better, Valsad in Gujarat is the rainiest place currently.

At present, #Valsad in #Gujarat is the rainiest place in #India with 291 mm of rainfall: https://t.co/0xgK1lFD3n#Weather#Monsoon#Monsoon2018#GujaratRains@TOIAhmedabadpic.twitter.com/cjMxw9gmdp

Road Caved in Near #MarineLines#MumbaiRains#Mumbai@RidlrMUM@mumbaitraffic#BMCpic.twitter.com/r2CT8gr83S

9:07 am - Not only Mumbai, rains are expected across the country.

Take a look at the latest #satellite images and maps of #India: https://t.co/eXji4VFwqa@toi@Live_Hindustanpic.twitter.com/stTg7OxdlM

9:06 am - According to reports, the traffic in Mumbai is better than it was yesterday at the same time.

Good news for employees! Minimum pension under EPS likely to be doubled