Heavy waterlogging was reported across Mumbai resulting in massive traffic snarls. Train services were also impacted due to heavy rains 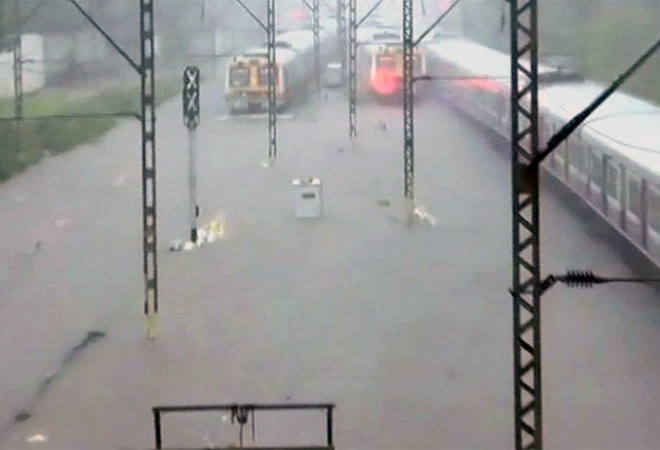 Services were suspended on the Harbour Line between CSMT-Vashi suspended from 10:20 am, according to Central railway CPRO

Mumbai came to a standstill for a few hours as heavy rains lashed India's financial capital. Transportation services have, however, resumed in parts of Mumbai. Trans Harbour Line and BSU (Uran) are running smoothly as of now. Shuttle services from Thane to Kasara/Karjat and Vashi-Panvel have also resumed.

Services were not affected on the Western Railway route and their local services were running smoothly, according to WR chief spokesperson Sumit Thakur. Thakur added water pumps were used for clearing inundated water.

Heavy waterlogging was reported across Mumbai resulting in massive traffic snarls. Train services were suspended on the Harbour Line between CSMT-Vashi from 10:20 am, according to Central railway CPRO. Train services between Kurla-CSMT, Kurla-Sion and CSMT-Thane were also suspended from 9:50 am and 10:20 am respectively.

Traffic has also been stopped at various locations like Eastern Express Highway-Chembur and Kings Circle as a precautionary measure. Andheri Subway has also been closed due to severe waterlogging.

#WATCH | Maharashtra: Severe waterlogging at Kings Circle in Mumbai, due to heavy rainfall. #Monsoon has arrived in Mumbai today. pic.twitter.com/PI2ySwhBCR

Weather department has also predicted cloudy sky with moderate rain and thundershowers in the city and suburbs, adding heavy to very heavy rainfall is likely at isolated places.

Colaba observatory (South Mumbai) received 77.4mm whereas Santacruz observatory (suburbs) received 59.6mm downpour in the last 24 hours, according to IMD. IMD had warned of heavy rains between June 9-12 in all districts-Mumbai, Thane, Palghar, and Raigad earlier this week.

Eastern and western suburbs of the island city recorded 48.49mm, 66.99mm and 48.99mm respectively in last 24 hours, as per the Brihanmumbai Municipal Corporation (BMC).

Hiring outlook likely to be stable in Q3FY22, shows survey