During the day, Congress President Rahul Gandhi attacked the Prime Minister on lack of jobs and PM Modi's pre-poll promise of depositing Rs 15 lakh in bank accounts of poor. 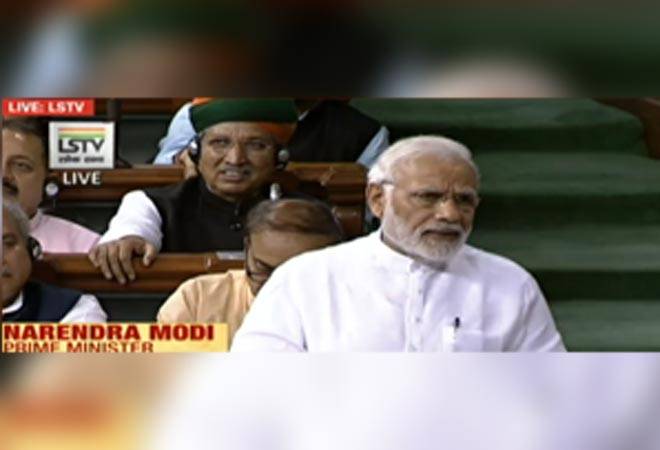 Prime Minister Narendra Modi during the extended Parliament session on Friday said Members of Parliament should reject the No-Confidence Motion. He said the No-Confidence Motion has exposed the kind of opposition some people have towards development. PM Modi mocked Rahul Gandhi over his gesture to make him stand from seat before hugging, saying what is the hurry to get the PM's chair. He said the floor test was not to measure the strength of his government, rather it was a "force test" for the Congress and other Opposition parties.

Earlier during the day, Congress President Rahul Gandhi said PM Modi fooled the masses when he said that 2 crore jobs will be created every year while only 4 lakh jobs have been created so far. Taking on the BJP-led government for not bringing in petrol and diesel under the GST, Gandhi said, "GST was brought by the Congress party. You had opposed GST as Gujarat CM." He added that small businesses have been hit by this tax regime.

The Congress President also attacked Defence Minister Nirmala Sitharaman for falsely claiming that there was a secrecy pact between India and France. PM Modi works only for 10-20 businessmen and not for the common man, Gandhi said.

11.51pm: NDA has the confidence of the Lok Sabha and the 125 crore people of India, says PM Modi.

NDA has the confidence of the Lok Sabha and the 125 crore people of India.

I thank all the parties that have supported us in the vote today. Our efforts to transform India and fulfil the dreams of our youth continue. Jai Hind!

Somebody give Modi a hug and tell him to stop. Yawn! He has not answered a single question raised. Utter nonsense, full-on rhetorical rubbish. Spare the nation, please!

10.45pm: Modi says the nation has been misled on the Rafale deal by giving irresponsible statements, and the national security has been compromised.

10.37pm: PM Modi says, "You called the surgical strike a Jumla Strike. You can abuse me as much as you want but stop insulting the Jawans of India. I will not tolerate this insult to our forces."

#WATCH PM Modi says, "You called the surgical strike a Jumla Strike. You can abuse me as much as you want but stop insulting the Jawans of India. I will not tolerate this insult to our forces." pic.twitter.com/qQ3rP9Xui5

10.36pm: Loans were given over the phone in Congress rule, the web of NPAs was spread during this time:PM Modi in Lok Sabha.

10.32pm: "I want to share an important data with you. Total Rs 18-lakh crore disbursed as loans to different business houses in the 60 years of independence, but between 2008 and 2014, the amount jumped from Rs 18-lakh crore to Rs 52-lakh crore. How did it happen? The Congress disbursed Rs 34-lakh crore through 'phone banking', whenever some businessman called, his loan was approved. Whenever he had repay the loan, he was given another loan. But we changed the entire system of loan approval," says PM Modi.

10.26pm: We succeeded in getting all states on-board on GST, says PM Modi.

10.22pm: Get all the latest update on the No-Confidence Motion against the Modi government.

10.14pm: It was the Congress Party that had decided to put petroleum products out of the purview of the Goods and Services Tax, says PM.

10.06pm: We are 'bhagidars' (participants) of the country and 'chaukidars' (guards) too, but not 'saudagars' (businessmen) or 'thekedars' (contractors) like you, says PM Modi, referring to Rahul Gandhi's jibe on him.

10.04pm: It was the Congress party that decided to keep petrol out of GST, says PM Modi.

10.00pm: The BJP government has worked towards the electrification of 18,800 villages, which were in darkness for the past 70 years, PM Modi.

9.37pm: PM Modi mocks Rahul Gandhi over his gesture to make him stand from seat before hugging, saying what is the hurry to get the PM's chair. Only the electorate of the country can decide his fate and make him sit on his chair, Modi says.

9.33pm: PM Modi says the no-confidence move has exposed the kind of opposition some people have towards development.

9.29pm: This is not a floor test but a forced test by the Opposition, says PM Modi.

9.18pm: The non-confidence motion is an important aspect of our democracy, says PM Modi, requesting members of Parliament to reject it.

02:00 pm: Rahul Gandhi walks up to Prime Minister and hugs him.

12:10 pm: Leader of the Congress in the Lok Sabha Mallikarjun Kharge accused Speaker Sumitra Mahajan of being unfair in allotting too little time to the opposition in the debate on the no-confidence motion and said the discussion cannot be treated as Question Hour. The 32 minutes allotted to his party is grossly inadequate, Kharge said. A few minutes to each speaker is not enough to raise the host of issues, including those affecting farmers, women and Dalits, he added. Some parties have been allotted 25 minutes and some just 15 minutes, Kharge pointed out.

11:45 am: We are with the government, Bihar Chief Minister Nitish Kumar said on being asked about the JD(U)'s stand on no-confidence motion in the Lok Sabha

11:40 am: TDP MP Jayadev Galla continues to speak even after 13 minutes. "You are (PM) singing a different tune, which the people of Andhra Pradesh are keenly observing and they would give a befitting reply in the upcoming polls. If people of Andhra are cheated, the BJP will be also decimated in the state like the Congress. Mr PM, it's not a threat, it's a shraap (curse)," he says

10:30 am: BJP chief Amit Shah reaches Parliament and flashes victory sign. PM Modi has called for a meeting of his top ministers at 10.30 am to discuss the no-confidence motion.

JioPhone available for Rs 501 from today under Monsoon Hungama Offer