The hard-hitting remarks came days after the Chief Justice of India slammed the Narendra Modi-led government at the Centre for "trying to bring the entire judicial system to a grinding halt" by delaying judges' appointments and warned that the Supreme Court may be forced to intervene on the issue by passing orders. 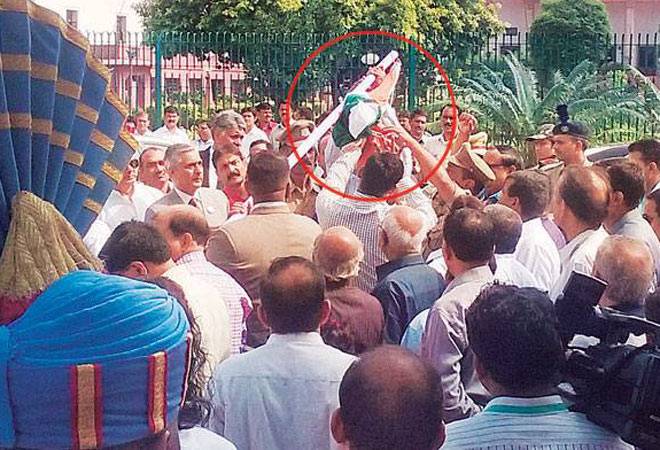 Independence Day celebrations at the Supreme Court on Monday began on a dramatic note when the Tricolour being hoisted by Chief Justice of India TS Thakur fell down even as the law minister and other judges of the apex court looked on.

The pole was uprooted, the flag fastened to the rope and it was hoisted again amid a rerun of the national anthem.

But minutes later, the CJI wielded the episode to lash out at the Narendra Modi government and Law Minister Ravi Shankar Prasad in particular for "not sparing a thought for the justice delivery system", delay in appointment of judges and an intense standoff over a mechanism to fill vacancies in courts.

The flag fell off, but we uprooted the pole, tied the flag to it and hoisted it again. That is our resolve," Thakur said amid thunderous applause.

The hard-hitting remarks came days after the Chief Justice of India slammed the Narendra Modi-led government at the Centre for "trying to bring the entire judicial system to a grinding halt" by delaying judges' appointments and warned that the Supreme Court may be forced to intervene on the issue by passing orders.

Millions of cases are pending in India's courts, draining litigants of resources and pointing towards an urgent need for more judges and judicial reforms. Thakur said this year that the country needs to double the number of judges from its current strength of 21,000 to about 40,000.

Pointing out that he will speak bluntly both inside and outside the court as he knows he has reached the "peak" of his career and from here he "does not have anywhere else to go", the CJI said, "I have no hesitation in saying anything. You may make roads, schools, hospitals, but please also do say something about justice delivery to people. I heard the speech of the PM for an hour and also that of the law minister. I thought they will say something about justice delivery and appointment of judges. Cases are piling up as there aren't a sufficient number of judges. But it seems the government is not bothered."

"You claim you have given so much to the other sectors. Throw something towards us also," CJI Thakur said, ending his 20-minute speech after which he got a standing ovation.

Deep differences persist between the collegium headed by the CJI and the Centre over the memorandum of procedure (MOP) for the appointment of SC and HC judges being drafted by the government.

The apex court last year struck down a new law that replaced the system of judges appointing judges with a panel in which the executive was to have a say in judicial appointments, saying it eroded judicial independence.

The collegium also feels that most clauses in the MOP being drafted by the government are "not in harmony" with the tenets of independent functioning of the judiciary.

"The collegium has cleared 75 names of high court judges (for transfer/ appointment) but they have not been approved," the CJI said in open court on Friday while hearing a PIL on the issue.

"I don't know why, where these files are stuck. Why there is mistrust. Judges who have been transferred by the collegium have not been transferred. We don't want all this."

On April 25, during the national conference of state chief justices and chief ministers, an emotional Thakur launched an unprecedented attack on the present and previous governments for frequently blaming the judiciary for mounting backlog of cases, which touched an alarming 3.14 crore, but at the same time doing nothing to increase the number of judges and courts despite repeated pleas from the judiciary.

Speaking before the CJI, Law Minister Prasad said his government was "committed to the cause of judicial independence" and very soon a memorandum of procedure will be finalised after harmonious consultation with the collegium.

"Judicial delivery is integral to good governance. Our commitment to the cause of judicial independence is total. We are in the process of finalising the MOP. I want to clarify that regardless of that, judicial appointments are going on. The government and the collegium have to work in harmony. I know the problems; we will work together," he said.

Petrol price cut by Rs 1, diesel by Rs 2 per litre