The National Green Tribunal has deferred the ban for two weeks after the Delhi government made presentations to the bench on how implementing the order was posing practical difficulties. 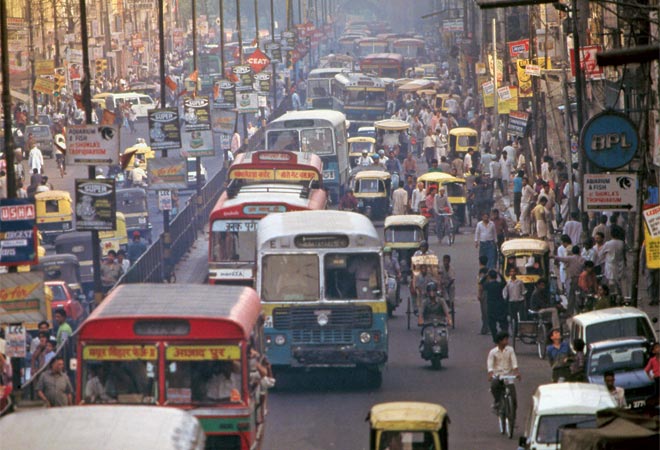 The NGT in its April 7 order noted that diesel is the prime source of air pollution in Delhi while rising number of these vehicles are holding traffic to ransom on the city roads. (Photo for representation purposes only)

A major crisis situation was averted in the capital city with the National Green Tribunal, on Monday, deferring its ban on diesel vehicles older than 10 years for two weeks. The breakthrough came after the Delhi government, and its various departments, made presentations to the NGT bench headed by Justice Swatanter Kumar on how implementing the order was posing practical difficulties.

While seeking more time from the green court to implement the order, they argued that essential services like diesel-run buses, milk vans, garbage trucks, etc, will be hurt by the order.

At least 12,000-15,000 diesel trucks of Uttar Pradesh, Haryana, Rajasthan, Madhya Pradesh and Karnataka registration numbers make trips to Delhi, on a daily basis, to deliver grains, fruits, dry fruits and vegetables. An estimated 400 of these had been held up at various checkpoints on Delhi's border since April 7 when the NGT passed the ruling on diesel-run vehicles.

With this successful appeal, the government has been able to put off a strike by the All India Motor Transport Congress (AIMTC), the umbrella body of 2,500 trans-port associations. The AIMTC, with 75 lakh truckers under its wings, has now deferred its strike till May 1 when the NGT will hold its next hearing in the case.

Until an amendment is made to the Motor Vehicle Act, Delhi, Haryana and Uttar Pradesh will legally not be able to impound vehicles that are over the prescribed age limit.
Reprimanding the government for its inaction so far, the court said, "We may notice that during the hearings in the last six months, we had asked for suggestions on (vehicular pollution) issues without much result. We do hope the government and stakeholders concerned will respond without default and delay (by May 1). During the period of two weeks that we have provided to authorities concerned, there shall be no impounding of vehicles on account of age."

"We make it clear that we are varying our directions only to this extent. However, all vehicles shall be subject to prescribed pollution check and other environmental norms," the order added.

Senior lawyer representing the Delhi government, Zubeida Begum, told MAIL TODAY, "We told the bench that services like food supply, garbage collection and ambulances will fall into disarray if we implement the order in a hurry. The court consented to our request."

Strike called off Balendu Shekhar, counsel for the East Delhi Municipal Corporation said, "We also produced before the judges the proof of what we have done so far to execute their rulings. We told them the EDMC is reviewing its parking charges to disincentivise car buying. We have also put up advertisements informing the public of the NGT's recent orders on pollution."

AIMTC president Bhim Wadhwa said, "We met Delhi Chief Minister Arvind Kejriwal on Sunday and Union Minister for Transport Nitin Gadkari on Monday. Both have assured us that our interest will be taken care of."

Fruit and vegetable prices in the city's mandis were not affected till Monday. Anil Malhotra of Azadpur Mandi Agricultural Produce Market Committee said, "There is no increase in prices right now but the effect of trucks being held up may show in the coming days."

In Monday's order, the green court also expressed an interest in knowing how the government plans to control the number of private cars in Delhi.

The order read: "Union of India, Government of NCT, Delhi… should submit to the Tribunal: (i) Age of all vehicles to be permitted to run in Delhi with reference to all sources of fuel. (ii) Cap on the number of vehicles to be registered in Delhi-NCR. (iii) Benefits or concessions that can be provided to the transferor/transferee of the vehicle which are prohibited to run on the roads of Delhi-NCR.

ESSENTIAL SERVICES LIKELY TO BE HIT

>> Number of trucks that carry fruits, dry fruits,milk, vegetables and grains into Delhi from other states: 12,000-15,000

>> Number of traffic cranes in Delhi: 19

Panagariya expects economy to grow at 8-10% for 15 years

Why order for Rafale jets signals end of larger deal