Govt to continue talks on visa issues with US, enhance access for agri products

According to the joint statement, the US took note of India's interest in ensuring easier access for Indian professionals in the US. 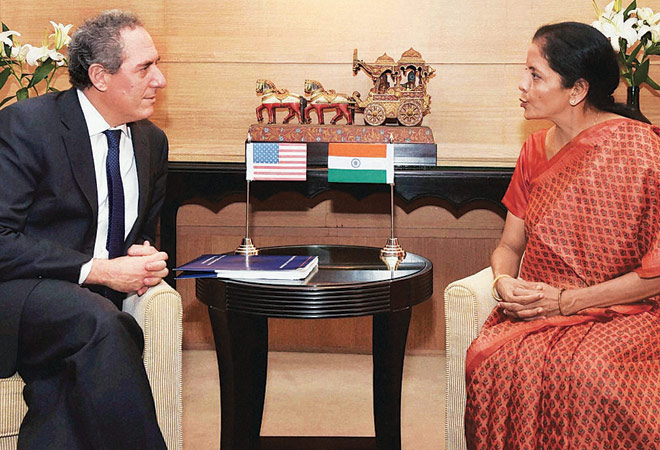 These issues were discussed during the Trade Policy Forum meeting co-chaired by commerce and industry minister Nirmala Sitharaman and US trade representative (USTR) Michael Froman in the national capital, according to an India-US joint statement issued after the meeting. The countries held a formal trade dialogue after four years.

Froman said that he was cautiously optimistic after the talks, but played down hopes of major "deliverables" at President Barack Obama's visit to India in January. Direct talks between Obama and Prime Minister Narendra Modi this month had helped to break the deadlock in the crucial World Trade Organization talks.

Froman welcomed Modi's 'Make in India' drive to bring about a Chinese-style manufacturing boom as well as initiatives to spread access to digital services and build smart cities.

But he also urged India to keep its market open and ensure that foreign investors can operate in a "transparent, predictable and consistent" environment.

"Expectations are very high and it would be important to translate those expectations into concrete measures on the ground," he said at a press conference after the talks with Sithamaran.

Froman said that Tuesday's talks had set out a "robust" work plan for the year ahead. Officials from the Indian side said that there were no breakthroughs, but also said that trade discussions would be intensified.

According to the joint statement, both countries decided to continue their engagement on visa issues, and the US took note of India's interest in ensuring easier access for Indian professionals in the US.

On IPR, Sitharaman and Froman acknowledged the paramount goal of ensuring the poorest in India and the US have access to quality health care. Both the sides committed to identifying ways in which trade and innovation policies can enhance access to affordable medicines. This refers to the generic drugs supplied by Indian companies that are cheaper versions of branded drugs.

However, global pharma giants like Pfizer and Novartis have been complaining that Indian IPR laws do not protect patent rights of foreign companies.

CAUTIOUS OPTIMISM
I think there is a great deal of interest in India and people are looking, as I have said, with cautious optimism about the sentiments that are leading to their mood change

INSURANCE BILL
I think there is lot of interest in the draft insurance law that is before Parliament, which is I understand (wants to) raise the FDI cap in that sector. It has been discussed for a long time '

IPR-RELATED ISSUES
There are challenging issues like in pharmaceuticals. I think, there we need to take a broad-based view of access to affordable and quality health care and the promotion of innovation.