Finance Minister Nirmala Sitharaman further said that India needs everyone to contribute towards nation building, while adding that she is not in agreement with people who claim that it is robbing the rich. 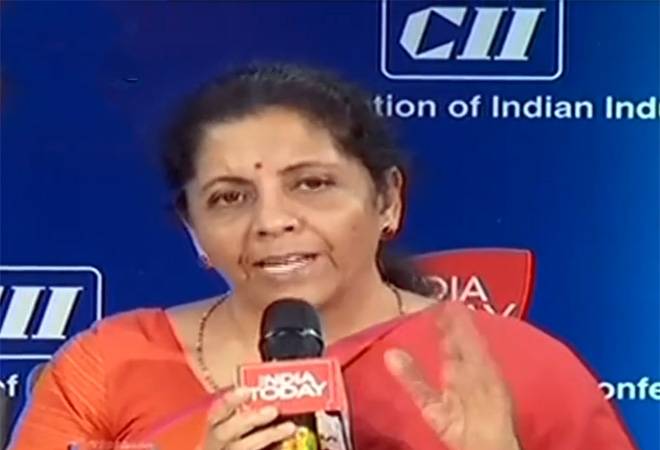 Finance Minister Nirmala Sitharaman justified the government's decision to impose higher taxes the super rich. While speaking at India Today TV event 'Budget Roundtable', Sitharaman said that the "country needs a bit more contribution from all of us".

When asked by Rahul Kanwal of India Today if the move to impose the enhanced surcharge on rich taxpayers will be counter-productive, the Finance Minister said, "I hope not."

Sitharaman further said that India needs everyone to contribute towards nation-building, while adding that she is not in agreement with people who claim that it is robbing the rich.

"I am certainly not in agreement with people who have told me this is robbing Peter to pay Paul, no sorry, all of us are a part of this country," she stated.

She went on to say, "All of us are part of this country and we might have to just, for some more time, bear with the not-so-equitable tax structure."

"Where do I get the money from otherwise? That is not to say I will rip off the rich," she articulated. Speaking about the benefits of various government initiatives such as GST, the Finance Minister said it is not just for the poor or rich of the country, but for everyone.

Also Watch:FM explains how tax on the super rich will not be counter productive

"Look at the benefits which are being given back that is not for just the poor or the rich, it's for everybody," Sitharaman highlighted.

Justifying the government's decision further, she enunciated, "I have to do that as much as give back somewhere, that's not like left hand gives and right hand takes away, but till such a time we get a reasonable level of equity I hope it doesn't mean that they are going away because after all your breadwinning is in this country. Why would you want to win bread from here and go elsewhere."

Finance Minister Nirmala Sitharaman in the Union Budget 2019 tabled in Parliament on July 5 proposed to increase surcharge from 15 per cent to 25 per cent on taxable income between Rs 2-5 crore and from 15 per cent to 37 per cent for income above Rs 5 crore. The exchequer is likely to forego a revenue of Rs 4,000 crore on account of the proposal to increase the ambit of the lower corporate tax rate to cover 99.3 per cent of Indian companies.

The government will rake in an additional Rs 30,000 crore in revenue from higher tax imposed on the super-rich and higher duties on petrol and diesel in current fiscal year, Revenue Secretary Ajay Bhushan Pandey had told PTI recently.

However, for the remaining nine months of the current fiscal, the government is expecting a revenue gain of Rs 22,000 crore. The surcharge on super rich is expected to fetch an additional Rs 12,000-13,000 crore.

The government is estimated to get an additional Rs 3,000-4,000 crore from the hike in customs duty on gold and precious metals to 12.5 per cent from 10 per cent. However, this gain will be offset by lowering of customs duty on various other goods.

Pandey said the exchequer will mobilise the additional resources by way of increase in duty and cess on petrol and diesel, and increased customs duty on gold and precious metals, besides higher surcharge on the super-rich.

However, there will be some revenue loss on account of the increase in the ambit of concessional corporate tax rate of 25 per cent to companies having a turnover of Rs 400 crore as against Rs 250 crore earlier.