The Union Minister for Road, Transport and Highways declared an income of Rs 6.4 lakh for 2017-18 in his election affidavit against Rs 2.7 lakh in his previous affidavit in FY14, while his wife's income shows a nearly 10-fold rise to Rs 40 lakh. 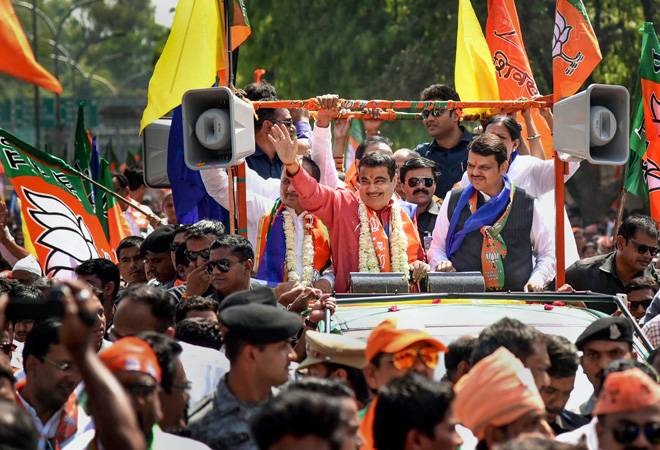 Nitin Gadkari, the Union minister for road, transport and highways, who filed his nomination from the Nagpur Lok Sabha seat yesterday amid a massive show of strength, has seen his income increase by over 137% over the past five years. He declared an income of Rs 6.4 lakh for 2017-18 in his election affidavit against Rs 2.7 lakh in his previous affidavit in 2013-14, when he contested his debut Lok Sabha polls, The Times of India reported. The biggest uptick came in FY15 when his income increased to Rs 6 lakh, but has remained mostly stable ever since.

In the same time frame, his wife Kanchan Gadkari grew more than six times richer than the union minister. The income declared by her reportedly shows a nearly 10-fold increase from Rs 4.6 lakh in 2013-14 to nearly Rs 40 lakh in 2017-18. Given that ministers' salaries were doubled last April to Rs 1 lakh a month, Gadkari's income in his ITR for FY19 will show at least Rs 12 lakh.

Incidentally, this is the first time that such detailed financial records of nominees and their family members are being made available in the public domain. Last month, the law ministry had amended the Conduct of Elections Rules, 1961, in line with the Election Commission's recommendations. Under the new rules it is now mandatory for candidates contesting in the polls to disclose the total income shown in their respective Income Tax Returns (ITR) for the last five financial years, as well as that of their spouses, dependents and the Hindu Undivided Family (HUF). In addition, they have to declare their foreign assets and liabilities.

A comparison of the couple's two affidavits also shows that Gadkari's bank deposits shrunk 57% to Rs 9 lakh while his wife's deposits have grown six fold from Rs 1.8 lakh five years ago to Rs 11 lakh in FY18. The minister has opened a separate account for electoral purposes with a balance of Rs 1 lakh, down from Rs 7 lakh in the earlier affidavit.

According to the daily, a similar trend can be seen in the Gadkaris' other investments. While the value of his investments in market instruments has declined 78% to Rs 3.55 lakh - primarily due to sale of shares - Kanchan's investments have gone up by around four times.

Besides, her assets are now worth Rs 7.3 crore, an increase of 127% from 2014. Kanchan's key assets include three properties with an aggregate value of Rs 4.4 crore, including a plot of agricultural land valued at Rs 88 lakh. The holdings remain the same as in 2014, but their market value has increased.

On the other hand, Gadkari's total assets (including inherited property of Rs 1.96 crore) reportedly stands at Rs 6.9 crore, a 10% rise from his 2014 affidavit. The minister's flat at Worli, Mumbai, is the sole property declared by him. Its market value has increased by a modest 12.5% from Rs 3.78 crore in the 2014 affidavit to Rs 4.25 crore in the last fiscal.

In addition, he has invested Rs 14.8 lakh in business in the last financial year, a nearly 25% jump over the declared figure in FY14. Gadkari's personal loans add up to Rs 1.57 crore (against Rs 1.3 crore in 2014), including Rs 1 crore from Housing Development and Infrastructure Limited, which has remained constant. While he owns two cars - an Ambassador and a Honda - worth Rs 20.10 lakh, his wife owns four cars valued at Rs 26.6 lakh.