The jewel collection includes a 17-carat Golconda diamond, a ceremonial sword of the Nizams of Hyderabad, and a bejewelled huqqa, among others, according to global auction house Christie. 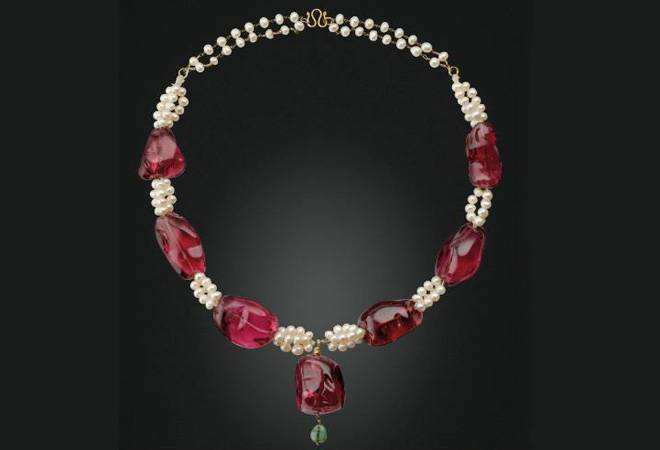 The 400 pieces of Indian jewellery that were auctioned at Christie's in the United States fetched about $ 109 million (approximately Rs 758 crore). The jewel collection includes a 17-carat Golconda diamond, a ceremonial sword of the Nizams of Hyderabad, and a bejewelled huqqa, among others, according to global auction house Christie. As per reports, the ceremonial sword of the Nizam fetched Rs 13.4 crore while another piece of diamond called the 'Mirror of Paradise' (52.58 carats), which originated from the Golconda mines was auctioned for nearly Rs 45 crore ($6,517,500).

An antique diamond necklace from the treasure house of the Nizams went for nearly Rs 17 crore ($2,415,000). As per some bidders, the 33-diamond necklace surpassed its estimate. Christie's announced on Twitter that the necklace was estimated to be sold for about Rs 10.5 crore ($1,500,000).

Meanwhile, back in Hyderabad, the Nizam's family was glued to Internet to find out the exact price for which the jewels were sold. Mir Najaf Ali Khan, the grandson of late Nizam Mir Osman Ali Khan, said that he "almost cried" when the white pearl necklace was sold. Additionally, a 17-carat Golconda "Arcot II" diamond, which was once owned by the Nawab of Arcot, was auctioned for Rs 23.5 crore ($3,375,00).

"It was the highest total for any auction of Indian art and Mughal objects, and the second-highest auction total for a private jewellery collection", a statement from the global auction house said.