PM Modi Lok Sabha speech: The Prime Minister emphasised on the role of private sector in the growth of the country 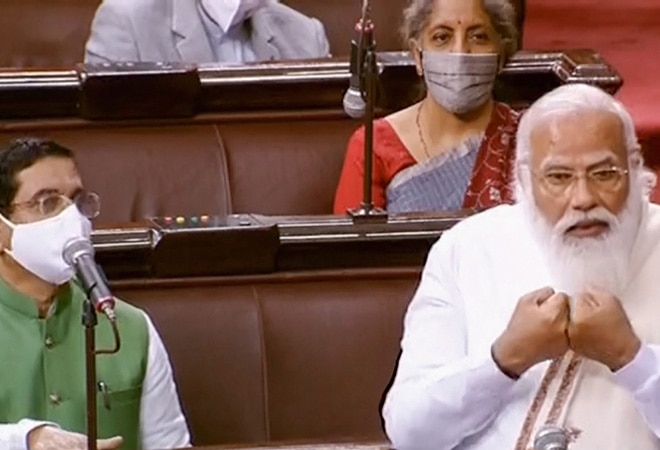 Parliament Session Live Updates: Prime Minister Narendra Modi addressed the Lok Sabha on Wednesday. The PM delivered the motion of thanks to the President's speech. Meanwhile, PM Modi's motion of thanks at the Rajya Sabha is still making headlines. PM Modi asked his fellow citizens to protect the country from 'andolan jeevis' who participate in every agitation. He also said that India needs to be aware of the new type of FDI - Foreign Destructive Ideology.

Here are the updates on his address in the Lok Sabha:

5:48 pm: I welcome farmers to discuss their concerns with us, says PM Modi.

5:36 pm: "I consider the farmer protests to be sacred. But, when Andolanjeevis hijack these sacred protests, showcase photos of those jailed for serious offences, does it serve any purpose? Not allowing toll plazas to work, destroying telecom towers - does it serve the movement," says the PM.

5:34 pm: "To use improper words against the private sector may have got votes for a few people in the past but those times are gone. The culture of abusing the private sector is not acceptable any longer. We cannot keep insulting our youth like this," says PM Modi.

5:25 pm: Kisan Rail has connected farmers to different corners of the country, says the PM.

5:15 pm: Criticising the Congress party, PM Modi said that party leaders in Rajya Sabha go in one direction and the ones in Lok Sabha go in another direction. "Such a divided party, such a confused party can neither help itself nor think about the country's welfare. The Congress is present in Rajya Sabha also, there are senior leaders there too. But they debate and discuss enthusiastically," he said.

5:10 pm: PM Modi gave examples of Raja Ram Mohan Roy and Jyotiba Phule and said that opposition did not stop them from pushing for reforms. "I am against this mentality. When it is said, they never asked for these laws. The people never asked for Ayushmaan Bharat, Jan Dhan, Swachh Bharat but we decided to take the initiatives. The government should work only when something is demanded, that time has gone," Prime Minister Narendra Modi said.

5:06 pm: "I want to ask any farmer, have these laws taken away anything that was there before? What has happened? An alternative system has been presented. This is optional, not compulsory. Farmers can go wherever they get more profit," said PM Modi.

5:03 pm: "Those who are disrupting the House are doing so according to a well-planned strategy. They are unable to digest that people are seeing through the truth. Through their games, the trust of the people can never be won," said PM Modi.

5:02 pm: "Three farm laws were brought in by government, these agricultural reforms are important and necessary. Farm laws were passed through an ordinance and later by Parliament. No mandis were shut after the implementation of these laws, MSP did not end anywhere in the nation. It's a truth which we hide, it has no meaning. Purchase on MSP increased after the laws were formed," said PM Modi.

4:56 pm: PM Modi said the Opposition should have not debated whether the farm laws are black or white but on the intent of it. He said that protesting farmers were victims of rumours that were spread. "This house and this government respects the spirit of protesting farmers and this is why senior ministers have been talking to them respectfully since the agitation was in Punjab. Efforts were made to identify the concerns of farmers. We make the laws for the people of this country. Even now, if they make any suggestions, we do not have objections," he said.

4:50 pm: PM Modi is heckled by Opposition MPs. "I thank you for giving me a second's rest," said PM Modi.

4:45 pm: PM Modi said if anyone is feeling discouraged, they must recall the struggle of Indians to motivate them. PM Modi said that Rs 2 lakh crore was given to the people this financial year. He said that it was possible only due to Aadhaar. PM Modi said, "I am shocked that there were people who moved courts against Aadhaar."

4:40 pm: Replying to Manish Tewari's comment that India was protected from coronavirus due to God's grace, PM Modi said, "I'd like to say something. This indeed is God's grace that the entire world shook but we remained safe. It was because doctors and nurses came as God, because they couldn't return to their homes for 15 days."

4:35 pm: "Today we can hear 'Vocal for Local' in every corner of India. People look for local. This sense of self-respect is working a lot for Aatmanirbhar Bharat," says PM Modi.

4:30 pm: "We are knocking at the doors of 75 yrs of independence. It's a matter of pride for every Indian and an occasion to move forward. We may be in any corner or belong to any strata of society but we must make a new resolve that where do we want to take India at 100 years of freedom," he said.

4:28 pm: "During coronavirus pandemic, the way India handled itself and helped the world recover is a turning point," the Prime Minister said.  "A new world order is emerging post-coronavirus. A new design of relationships is coming to light. We have to decide how to find a place for ourselves," he said. He added that in such a situation, India will have to emerge as a strong player.

4:25 pm: PM Modi quoted Swami Vivekananda and said, "Every nation has a message to deliver, ambition to fulfill, a destiny to reach."

4:22 pm: "I would like to thank our women MPs in particular because their participation was more," says PM Modi

4:20 pm: PM Modi congratulates MPs for participating in the discussions