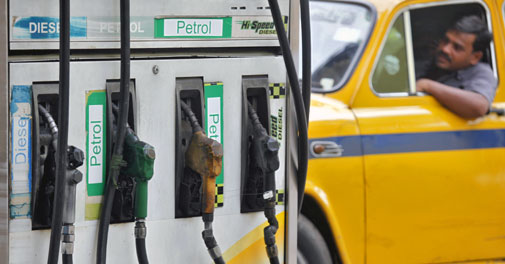 Petrol prices have been hiked by Rs 1.63 per litre, the seventh increase since June, on rising oil rates and falling rupee. The increase excludes local sales tax or VAT and will be effective Friday midnight.

With this increase, petrol prices have gone up by a massive Rs 10.80 per litre since June, excluding VAT.

A cut in petrol prices had been expected on September 15/16, the scheduled date for fortnightly revisions, on the back of an appreciating rupee over the past few days. However, the oil firms advanced the date and announced the increase after factoring in the rupee's depreciation in the early part of the month.

Indian Oil Corporation (IOC), the nation's largest oil firm, said average international prices of petrol have gone up to $117.40 a barrel from $114.44 a barrel while the average exchange rate has deteriorated to Rs 66.02 a dollar in September from Rs 63.88 a dollar in the second half of August.

"To give effect to these twin reasons, the Corporation is required to increase petrol prices by Rs 1.63 (excluding VAT) with effect from midnight of September 13-14," it said.

The appreciation in the rupee during the past one week "will be passed on to consumers in the next fortnight," IOC said.

Diesel prices may soon see a one-time hike of Rs 3-5 per litre, kerosene of Rs 2 a litre and LPG of Rs 50 per cylinder as the Oil Ministry looks at ways to tackle a record Rs 180,000 crore of losses from the dipping rupee and surging oil rates.