The oil marketing companies incurred a loss of Rs 35 crore per day during the 19-day pre-Karnataka poll hiatus in fuel price hikes. 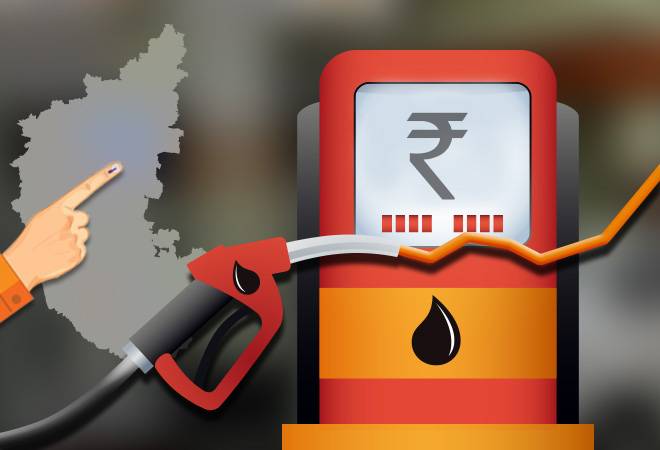 The oil marketing companies incurred a loss of Rs 35 crore per day during the 19-day pre-Karnataka poll hiatus in fuel price hikes. The markets suffered a total revenue loss of Rs 380 crore in this period, according to an analysis by the Business Standard. This figure is based on the average consumption of petrol as well as diesel. Indian Oil Corporation Ltd's marketing margins, for instance, reduced from an estimated Rs 3.4 per litre to Rs 0.6 per litre for petrol and from Rs 3.8 per litre to Rs 0.8 per litre for diesel.

However, they have started recouping their losses. Yesterday, petrol price was hiked by 17 paise a litre and diesel by 21 paise as the PSU oil firms resumed passing on the spike witnessed in international rates to consumers. The fuel price hike continued for a second day today. As per IOCL's website, petrol price in Mumbai are now at Rs 82.79 a litre, while diesel prices reached Rs 70.66. Similarly, in Delhi the petrol price touched Rs 74.95 a litre, while diesel prices stood at Rs 66.36. The petrol figures for Chennai and Kolkata stand at Rs 77.77 and Rs 77.65 per litre respectively, while diesel costs Rs 70.02 and Rs 68.90 per litre respectively. These are the highest levels since 2013.

There could be far worse news in the offing. Sources told the daily that OMCs will not only gun for successive upward revisions in the coming weeks to recover the loss, but they may also hedge for a bigger retail price hike to the tune of Rs 1.5-2 per litre over two to three weeks. So prepare to toss your monthly budget out of the window. The rupee steadily weakening against the dollar only makes matters worse. It has already depreciated 5 per cent this year, and if it continues to slip, sharper fuel price hikes in the near future will no longer remain mere speculation.

The temporary freeze on fuel prices also did a number on OMC stocks. The report added that OMC stocks had crashed 6-7 per cent intra-day in April, when the government had publicly asked them to absorb losses. Value-buying has since slowly pushed up prices. Given that OMCs margins dropping below Rs 1 per litre are sure to have an impact on their first quarter results, more stock market upheaval could be on the cards.

The big question is whether the government will intervene and cut excise duty to bring relief to the OMCs and consumers alike. To remind you, the Modi government had cut excise duty by Rs 2 per litre in October 2017, when petrol price reached Rs 70.88 per litre in Delhi and diesel Rs 59.14. Fuel prices are significantly higher than that currently.