PM Modi will first address the mega 'Howdy Modi' rally with Trump in Houston on September 22. The two leaders would then meet for a bilateral meeting on the sidelines of the United Nations General Assembly (UNGA) session in New York on September 24. 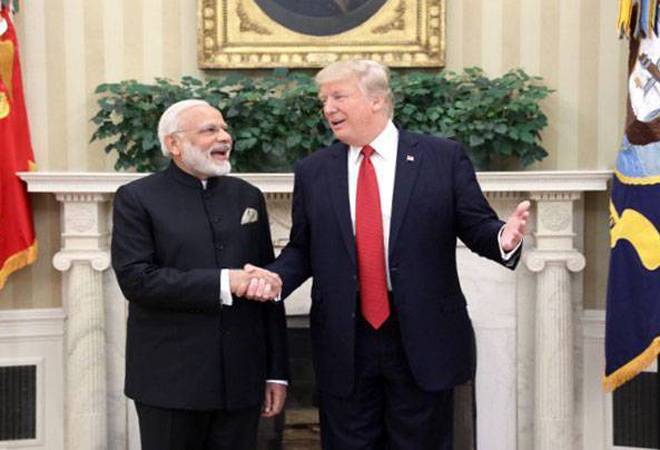 Prime Minister Narendra Modi and US President Donald Trump are slated to meet twice during the former's upcoming visit to the United States from September 21-27.

Prime Minister Narendra Modi and US President Donald Trump are slated to meet twice during the former's upcoming visit to the United States from September 21-27. PM Modi will first address the mega 'Howdy Modi' rally with Trump in Houston on September 22. The event will be attended by the members of the Indian-American community.

The two leaders would then meet for a bilateral meeting on the sidelines of the United Nations General Assembly (UNGA) session in New York on September 24.

"The meeting is in New York on the 24th. The Houston leg is only related to participation at the Indian diaspora event," said India's foreign secretary Vijay Gokhale during a media briefing on Thursday.

Also Read:Donald Trump hints at some announcement at 'Howdy Modi' event in Houston

Meanwhile, President Trump Wednesday had hinted towards making some announcement at the Houston event with PM Modi. The two have been working out a trade deal however, it is not confirmed whether the "announcement" pertains to reinstating India's Generalised System of Preferences (GSP) status that US had withdrawn in June over Indo-US tariff war.

Gokhale had on Thursday said that India meets the criteria for trade concessions under the GSP. He asserted that it was up to America to take a call on reinstating India's status as a beneficiary of that programme.

When asked whether India is in negotiation with the US on its designation as beneficiary developing country under the GSP programme, the foreign secretary said, "It has always been India's position that GSP is a unilateral decision given by countries to other countries based on certain criteria. We are a developing country and meet those criteria. I do not recall ever stating that we are not interested in GSP. US withdrew that concession unilaterally from us. Our position is clear that GSP is important for our industry."

His remarks came after a bipartisan group of 44 US lawmakers urged the Trump administration to reinstate India's designation as a beneficiary developing nation under the key GSP trade programme.

The Trump administration terminated India's designation as a beneficiary developing nation under the GSP on June 5. The GSP is the largest and oldest US trade preference programme and is designed to promote economic development by allowing duty-free entry for thousands of products from designated beneficiary countries.

Asked whether trade and tariff-related issues between the two countries could be taken up during Prime Minister Modi's bilateral meeting with President Trump in the US, Gokhale said in their meeting in Osaka, the two leaders discussed several issues, including the trade issue.

"This is one of the issues where we feel forward movement should be taken which is mutually balanced which addresses the concerns of both sides. I have no doubt, it will figure in their discussions. But for the eventual outcome, that is something which we will have to wait for," Gokhale said.

Soon after arriving in Houston on late afternoon of September 21 (Saturday), Modi will head straight into his first business event -- a round table with several chief executives from the energy sector.

After the Houston rally on September 22, PM Modi will address a gathering of close to 50,000 people at the NGR stadium in Houston. He will later engage with the US congress members before he leaves for New York that evening.

On September 23 (Monday), he will address the Climate Action Summit hosted by UN Secretary General Antonio Guterres at around 10 am (7:30 pm IST).  PM Modi will also showcase India's 'Ayushman Bharat' programme at another event later in the day on universal health coverage hosted by the UNSG.

"He will showcase what India has done to tackle climate change issues and also our expectations and aspirations from the international community to address this very pressing problem," said Gokhale on PM's address at the Climate Summit.

A third event is the leaders' dialogue on strategic response to terrorism and violent extremists narratives. The event will be hosted by the King of Jordan, President of France, Prime Minister of New Zealand and the UNSG. It will be attended by Indian PM, Presidents of Kenya, Indonesia; Prime Minister of UK, German chancellor, etc.

UNSG will host a lunch on September 24 (Tuesday), and then the Indian mission to the UN in New York will organise the 150th anniversary event called 'Leadership Matters: Relevance of Gandhi in Temporary Times' to commemorate Mahatma Gandhi in the UN. PM Modi will be joined by some Heads of Government and Heads of States, including UNSG Guterres.

On the same day, PM  Modi will be accorded the 'Global Goalkeepers Award' at Lincoln Centre by Bill and Melinda Gates Foundation for leadership in the field of sanitation through Swachch Bharat Abhiyan.

On September 25, the Prime Minister will deliver a keynote address at the plenary of the Bloomberg global business forum.