While Modi visited the Maldives in November 2018 to attend President Solih's swearing-in, this visit is the first by an Indian prime minister at a bilateral level in eight years 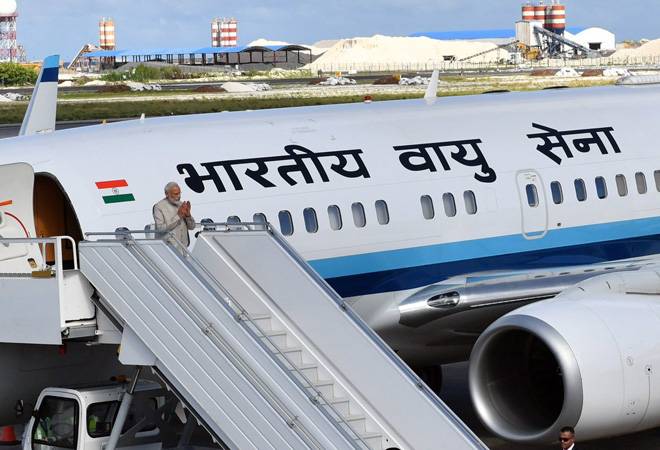 Narendra Modi arrived in the Maldives on Saturday on his first foreign visit after re-election as Prime Minister to strengthen the bilateral ties, reflecting the importance India attaches to its 'Neighbourhood First' policy.

Reached the Republic of Maldives.

This visit indicates the importance India attaches to strong ties with the Republic of Maldives and the desire to boost cooperation in various spheres. pic.twitter.com/EwpwMzThvH

While Modi visited the Maldives in November 2018 to attend President Solih's swearing-in, this visit is the first by an Indian prime minister at a bilateral level in eight years.

The two-day visit is aimed at further cementing ties with the Indian Ocean archipelago.

Prime Minister Modi will be conferred with the Maldives' highest honour "Rule of Nishan Izzuddeen" during his visit.

"The Most Honourable Order of the Distinguished Rule of Nishan Izzuddeen" is the Maldives' highest honour accorded to foreign dignitaries, Foreign Minister Shahid said on Twitter ahead of his visit.

Prime Minister Modi Friday said his visit to the Maldives reflects the importance India attaches to its 'Neighbourhood First' policy.

Modi said India considers the country as a valued partner with whom it shares deep bonds of history and culture.

During the visit, the prime minister will address the Maldivian Parliament, the Majlis, an indication of India's important position in the neighbourhood.

He is expected to meet the top leadership of the Maldives to strengthen the relationship at the highest level.

To assist the Maldives in its development and revival of its economy, a slew of MoUs are expected to be signed including budgetary support for development projects, extending the Line of Credit for projects like water supply and sewerage, high impact community development projects, customs and white shipping, official sources said.

To consolidate people-to-people relations, Modi's latest emphasis is on cricket diplomacy in the island nation, helping the mission of President Solih to develop cricket, they said.

Giving a push to enhance connectivity, India is planning to start a ferry service from Kochi to the Maldives, the sources said.

The relations between India and the Maldives deteriorated after the then President Abdulla Yameen imposed emergency on February 5 last year. However, ties were back on track under Solih's presidency.

His visit demonstrates the priority that India attaches to the SAGAR (Security and Growth for All in the Region) doctrine, the sources added.

Railways to now provide massage service on board in 39 trains; check out price