Terming it "opposition for the sake of opposition", PM Modi said that by opposing big reformative steps by the Centre such as the farm laws, these forces were making themselves irrelevant in the society and in the country 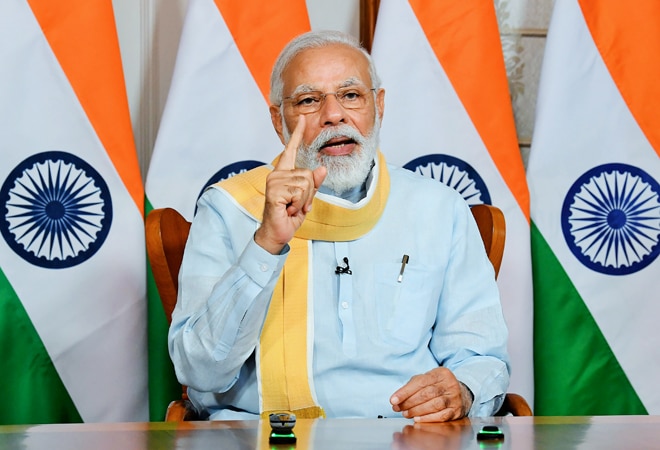 In a scathing attack on those opposing the new farm laws, Prime Minister Narendra Modi said they wanted only the middlemen to thrive and referred to the burning of a tractor in Delhi by Congress workers as an insult to farmers. "They are opposing the freedom of farmers and want their problems to continue forever. By torching farming equipment, which the agriculturists worship, these people are now insulting farmers," he said without naming the Congress.

The Congress' youth wing activists on Monday morning set a tractor ablaze near India Gate, a few hundred metres from the Rashtrapati Bhavan and Parliament, to protest the contentious farm laws.

Modi said the opposition has only one way of doing politics in the country and that is by opposing things.

Terming it "opposition for the sake of opposition", the prime minister said that by opposing big reformative steps by the Centre such as the farm laws, these forces were making themselves irrelevant in the society and in the country.

He accused the opposition of opposing everything from GST, One Rank One Pension, Rafale deal, Statue of Unity, 10 per cent reservation for the poor and celebration of November 26 as Samvidhan Diwas.

He said that this politics of the opposition for opposition's sake was the root of the frustration of a party which had ruled for four generations.

"Frustration of a party which has ended up riding the shoulders of others despite wielding power for four generations is behind this politics of the opposition for opposition's sake, Modi said.

He said none of the leaders of the political party had till date visited the Statue of Unity, built to honour the memory of Sardar Vallabh Bhai Patel whose contribution to unifying the country is well known. "Why? Because they had to oppose," he said.

He said people had seen for themselves the role Jan Dhan accounts played in direct benefit transfer schemes during the coronavirus pandemic and they could also remember how it was opposed while being introduced by the Centre.

He said after opposing the Ram Mandir in the Supreme Court for decades, they even began opposing its foundation stone laying in Ayodhya.

Without naming the Congress, he accused it of being neither with the farmers nor with the youth nor the soldiers and recalled that the the party had demanded proof of surgical strikes instead of praising the bravehearts who carried out the exercise. He also recalled how it opposed the purchase of Rafale fighter jets.

"They did not do anything for years to strengthen the Air Force, ignoring its pleas for being better equipped and modernised. I am pleased to see that Rafale fighter jets are strengthening our Air Force today.

He said the farm laws were meant to set farmers free from restrictions which they had suffered for decades.

"They will have both MSP and the freedom to sell their produce anywhere in the open market but there are people who are spreading lies about the bills.

"They only want middlemen to thrive and want the problems of farmers to be perpetuated. The real reason behind the ongoing protests is that yet another source of black money has been closed for them," the prime minister said.

He said the process of empowering people, farmers and the youth, and making the country self-reliant through big reforms will continue relentlessly.

Modi also attacked the previous governments for wasting too much money over Ganga rejuvenation, drinking water and irrigations schemes without any results, claiming there was no coordination between the government departments involved.

"This led to further aggravation of the problems instead of resolving them. But today the work culture has changed and every penny is going into the implementation of the projects," he said.

Calling Bengaluru as epicentre of terror activities an 'insult' to the city: HD Kumaraswamy