The app, which will be available for download to merchants across the country, will link your Aadhaar number and biometic fingerprint to complete a transaction. 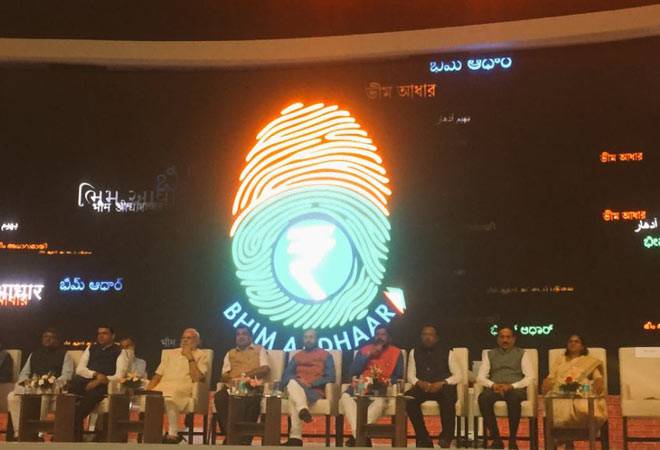 Prime Minister Narendra Modi on Friday launched BHIM-Aadhar platform - a biometric-based payment system - in Nagpur. BHIM-Aadhaar Pay app will allow users to make payments through the fingerprint scanner, by authenticating the biometric details of a user with Aadhaar database.

BHIM, also known as Bharat Interface for Money, was launched by Prime Minister Narendra Modi three months ago to provide a tool that can be a one-stop solution for all digital payments.

The app, which will be available for download to merchants across the country, will link your Aadhaar number and biometic fingerprint to complete a transaction. To enable the transactions through BHIM-Aadhar, merchants will have to purchase fingerprint scanners.

With more than 1.8 crore downloads of the app which is available both on the Google Play Store and the iOS App store, Prime Minister Narendra Modi on Friday launched two new offers to reward BHIM users. These two schemes are:

On completion of minimum 3 unique successful transactions totalling only Rs 50 to any 3 unique users (either to customers or to merchants), the referrer and the referee will be notified about the bonus amount via notification in BHIM app. The referrer will get Rs 10 per successful referral, while the new users will get Rs 25 for downloading and transacting from BHIM App.

The scheme incentivizes not just one-time adoption of BHIM by merchants, but will also encourage transactions via BHIM mode (either QR code or VPA or Mobile number or 'Pay to Aadhaar'). The cashback to the merchant can be up to Rs 300 per month, with each merchant eligible to win up to Rs 1800 in 6 months.

What is BHIM Aadhar app?

BHIM Aadhar is a new Aadhar Payment App is a new Android smartphone application being launched by the Narendra Modi government to encourage the use of digital payments. BHIM Aadhar Pay smartphone payment app would also eliminate the fee currently being charged by the private card companies such as 'MasterCard' and 'Visa'.

Who should install Aadhar Pay app?

Aadhar Pay App is need to be installed by merchants only i.e. only the shopkeepers, showrooms need to install aadhar pay app and the users who wants to pay using aadhar pay only need to link their aadhar number with their bank accounts. Shopkeepers/ Merchant can download aadhar pay to take payments from customers from their aadhar linked bank accounts using their biometric scan.

Merchants would just need to download the Aadhar Pay App and connect their smartphones to the biometric scan machine to accept the payments from customers. The merchants would also be required to connect their bank accounts and register themselves on the app.

The application can be downloaded from the Google Play Store by searching for 'Aadhar Pay' and clicking the download link.

Merchants would be required to download the BHIM Aadhar Pay payment app on their android smartphone connected to a biometric reader. The biometric reader is currently available for just Rs 2000. If a customer wants to make payment, then he/she just need to enter his Aadhar Number in the app and select the bank from which the payment is to be made and use the biometric scan as the password for the transaction.

Upon entering the Aadhar Number, the app would automatically fetch the bank accounts linked with your Aadhar number, then the customer can make the selection of bank for payment as per his/her choice

How will it help?

The Aadhar Pay App for merchants would help eliminate the long waiting period and hassle of getting a new POS (Point of Sale) machine. At present there are only 15 lakh POS machines deployed by the banks across the country. SBO alone has deployed over 3 lakh terminals followed by HDFC Bank and ICICI Bank.

BHIM Aadhaar Pay app is made available on a merchant's smartphone. Customers can pay the merchant by selecting the Bank's name and filling only one field on the merchant's phone - the Aadhaar number. The customer's fingerprint is the password used to authenticate the transaction.

Customers need not use debit or credit cards, download mobile applications or even carry a mobile to make cashless transactions. The solution eliminates the hassles of remembering passwords, account numbers, or setting up of virtual payment addresses and using USSD codes to transfer money.

The acceptability of digital payments has also been very poor among the merchants in the country. One of the biggest reasons behind this is India being a cash dominated country and 2%-3% charges taken by the card companies such as Visa and MasterCard.

Not only for the merchants, the BHIM Aadhar Payment would also be helpful for customers to get rid of their stacks of plastic money, confusing sets of passwords and their digital payment accounts passwords being stolen. Also, the customers need not to download a digital payment wallet or even a smartphone.

Customers don't need to have an android phone or any other technology to make payments. No service tax or any other extra charge on the payments using Aadhaar payments app. There is no need to carry debit card or credit card. No need to remember PINs, MPINs and passwords. Instant Payments through aadhaar bridge system this is similar to Aadhaar Enabled Payment system (AEPS). Affordable payment solution for merchants as well as customers.