India's services sector activity witnessed a moderate improvement in November over the previous month, even while indicating the fifth successive monthly contraction, an HSBC survey said. 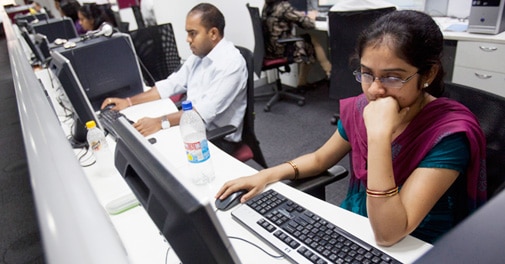 India's services sector activity witnessed a moderate improvement in November over the previous month, even while indicating the fifth successive monthly contraction, an HSBC survey said on Wednesday.

The HSBC/Markit Purchasing Managers Index for the services industry inched up to 47.2 in November from 47.1 in October, the fifth sub-50.0 reading and indicated an output contraction across the Indian service economy.

An index value of below 50 indicates contraction.

Business activity fell in five of the six broad sectors covered by the survey, the only exception being post and telecommunication, HSBC said adding that hotels and restaurants registered the third successive month of drop in activity.

"Service sector activity remains subdued, but would at least appear to be stabilising," HSBC Chief Economist for India and ASEAN Leif Eskesen said.

Though the service sector output registered fifth consecutive monthly drop in new work, the overall rate of contraction was moderate and little-changed from that seen in October.

Earlier this week, the HSBC/Markit manufacturing PMI showed that India's manufacturing sector witnessed an expansion in November for the first time since July, driven by rising new domestic orders.

Accordingly, the HSBC India Composite Output Index, which maps both services and manufacturing activity, remained below the 50.0 for the fifth month running in November. However, it up from 47.5 in October to 48.5 in November.

"The inflation picture is a bit mixed, with prices charged rising at a faster pace while input price inflation easing somewhat," Eskesen said.

Eskesen further noted that "looking ahead, economic activity is expected to remain soft in the coming months as high inflation, tighter financial conditions, and structural constraints continue to weigh on growth."

The Reserve Bank had hiked policy interest rates by 0.25 per cent each in September and October to bring down the stubbornly high inflation.

The Wholesale Price Index (WPI) based inflation stood at 8-month high of 7 per cent in October, while the retail inflation, based on Consumer Price Index (CPI), swelled to 10.09 per cent during the month, mainly on account of high food prices.