Priyanka Gandhi mixes up words at Fatehpur Sikri rally, but laughs it off

Lok Sabha Election 2019: Priyanka Gandhi lashed out at the ruling Bharatiya Janata Party and asked what their agenda for women and women's security is. 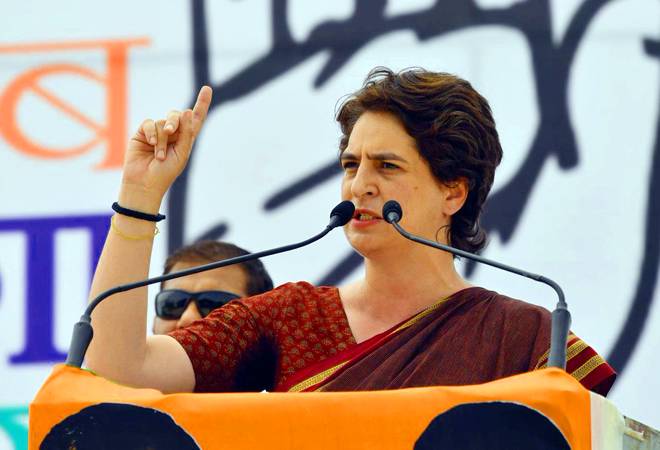 Priyanka Gandhi and Rahul Gandhi held a public meeting in Uttar Pradesh's Fatehpur Sikri today. Taking the stage before Rahul Gandhi, Priyanka Gandhi batted for the Congress party. During her speech, Gandhi fumbled but quickly made a save. Talking about the Congress manifesto Gandhi said, "Aisi yojnaein ghoshna patra mein hai jisse aapko swasth sarkari aspatalon mein muft milega" (There are schemes in the manifesto through which you will get free health in government hospitals).

She was just about to continue with her speech when she realised her gaffe and laughed about it. Gandhi acknowledged the mistake and said, "Swasth nahin... matlab swasth ki jaanch aur swasth ka ilaaj muft milega" (Not swasth...I mean diagnosis and treatment will be free).

Priyanka Gandhi then continued and said, "Swasth bhi mil jaye toh achcha hain" (It will be great if health can be given for free).

Gandhi lashed out at the ruling Bharatiya Janata Party and asked what their agenda for women and women's security is. "BJP is today talking about nationalism and Pakistan. They must talk what they have done for youth, farmers and other sections of society. They must tell what their agenda for women and women security is." She also said that if BJP is nationalist, then they should stop felicitating the ones who have defamed women.

Priyanka Gandhi also took a jibe at NaMo TV. "The government's campaigning is so good that they are present everywhere, from TV to trains...in fact, they are campaigning through food packets on polling day," she said.

Her brother Rahul Gandhi is infamous for making blunders during his speeches, something the rival parties do not let go easily.