Amid protests from BJP benches, Gandhi also took a swipe at  the 'Make in India' initiative, questioning whether farmers are not contributing to 'Make in India' by providing food to the entire country. 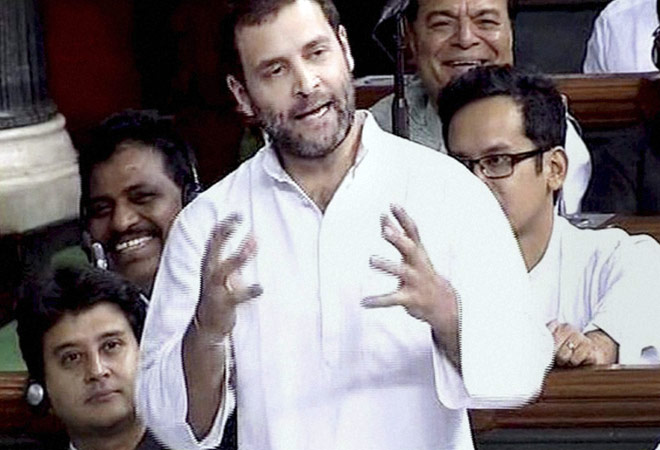 The Congress Vice President accused the government of not procuring the the produce of farmers, a charge that was flatly rejected by Food Minister Ram Vilas Paswan. (Photo: PTI)

Back from a tour of Punjab mandis, Rahul Gandhi on Wednesday targeted Prime Minister Narendra Modi over the plight of farmers triggering an uproar in Lok Sabha.

The Congress Vice President accused the government of not procuring the the produce of farmers, a charge that was flatly rejected by Food Minister Ram Vilas Paswan.

Raising the issue during Zero Hour, Gandhi said he wanted to apprise the House of the pain and problems of the Punjab farmer whose produce is lying in Mandis and is not being procured by the government.

Targeting the Prime Minister, he said he is on tours and should also visit Punjab so that he understands the plight of farmers.

Amid protests from BJP benches, Gandhi also took a swipe at the Prime Minister's 'Make in India' initiative, questioning whether farmers are not contributing to 'Make in India' by providing food to the entire country.

"When there was hailstorm, the government did not help.

State governmments used to give bonus, farmers tolerated its non-payment. Farmers were lathicharged when they asked for fertiliser. Now their produce is not being lifted from mandis", said Gandhi who visited mandis in Punjab on Tuesday.

"While farmers in the mandis are crying, the Haryana Agriculture Minister is saying farmers committing suicide are cowards", he said amid cries of "shame, shame" from the opposition.

Paswan rejected all Gandhi's charges, insisting that the government under the leadership of Modi had taken several decisions for the welfare of farmers which had not happened in the past 10 years of the UPA.

Contending that the Prime Minister is not only concerned about the welfare of farmers, Paswan said he has proactively taken several steps to help the farmers hit hard by unseasonal rains and hailstorm.

There was uproar over the issue, leading to adjournment of the House for 10 minutes.

The House saw uproar, with Congress and AAP members storming the Well when Food Processing Minister Harsimrat Kaur, who is a member from Punjab, was allowed by Speaker Sumitra Mahajan to speak after Gandhi's plea for a fair deal to the farmers in the state.

She took objection to Gandhi's visit to Punjab to assess farmers' condition, questioning why he had not toured his own constituency Amethi in Uttar Pradesh.

Harsimrat Kaur, daughter-in-law of Punjab Chief Minister Parkash Singh Badal, also took a swipe at Gandhi questioning where he was when farmers were facing the fury of hailstorm, apparently referring to his 57-day mysterious sabbatical.

Congress members, led by their Leader Mallikarjun Kharge, objected to Harsimrat Kaur being allowed to speak.

Amid the din, Parliamentary Affairs Minister M Venkaiah Naidu said that Paswan was ready to respond, but if the opposition wanted to politicise the matter then it was a different issue altogether.

Hitting back at Gandhi, Paswan remarked that the Congress leader was seeking to project himself as a crusader of the farmer's cause without doing anything much for their welfare.

Rejecting Gandhi's charge about non-procurement of farm produce in Punjab, the Food Minister said 57 lakh tonnes of grains have been procured from the state's farmers out of 64 lakh tonnes which had arrived in mandis.

Each and every grain will be procured, he said while noting that the government has extended several relaxations to farmers whose produce has been affected by hailstrom as also unseasonal rains.

The benchmark for lusture in the grain earlier was below one per cent. Now it has been increased between 50 to 90 per cent, Paswan said.

The government has also decided to end the 'full' value cut on grains damaged by water. Now the value cut would be either half or one-fourth, he added.

Paswan said the duty on ethnol has been brought down and the import duty on sugar as demanded by cane farmers have been raised from 25 to 40 per cent.

Gandhi also told the government that if it helped the farmers by extending compensation, it will benefit it politically and "not to us".

Taking a jibe at Gandhi's nearly two-month-long sabbatical, Kaur wondered where the Congress leader had gone when farmers were facing hailstorm. She also pointed out that the Akali Dal-BJP government was helping the farmers and arrangements have been made to procure grains.

Saugata Roy (TMC) and Mallikarjun Kharge (Cong) wondered as to how Kaur was allowed to have her say in Zero Hour when the issue pertained to Food Ministry looked after by Paswan.

Speaker Sumitra Mahajan said since Kaur is Minister for Food Processing and a member from Punjab, she was allowed to intervene.

Jyotiraditya Scindia (Cong) wanted the remarks made by Kaur that Rahul did not visit his constituency to be expunged.

The Speaker said she will look into the issue.

Roy asked whether the Chair was setting a new precedent by allowing ministers to intervene. He said if that was the case, then ministers should reply to every question raised by members in Zero Hour. Roy also said that Kaur objected to Rahul's visit to Punjab as if the state was a "fiefdom of the Badals".

The Speaker said she can allow ministers to speak if they make suo motu interventions but she cannot insist that they reply to every issue raised during Zero Hour.

Apparently unhappy at frequent interruptions by members, Mahajan said members should instead "teach" her for one hour how to run the proceedings.