Railway Minister Piyush Goyal has flagged issues, which have hampered work on the Rs 81,000 crore dedicated freight corridor, in letters to nine chief ministers urging them to intervene 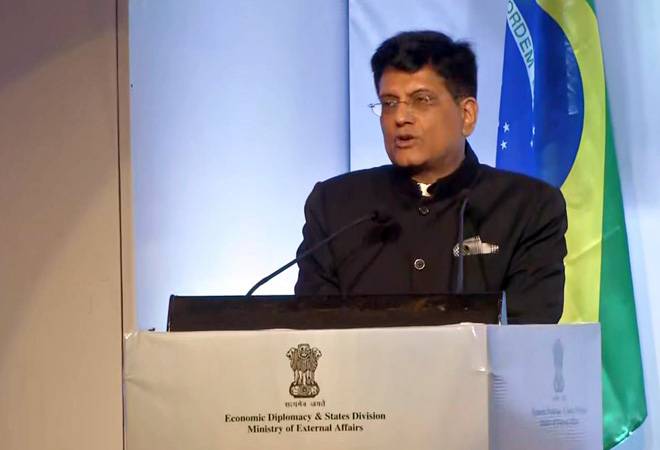 From land issues, pending arbitrations and demands of villagers to sluggish work by state authorities, Railway Minister Piyush Goyal has flagged issues, which have hampered work on the Rs 81,000 crore dedicated freight corridor, in letters to nine chief ministers urging them to intervene and told them that the prime minister was "monitoring the project closely".

Following concerns raised by the PMO, Goyal in letters to the chief ministers of Gujarat, Uttar Pradesh, Bihar, Punjab, West Bengal, Haryana, Rajasthan, Maharashtra and Jharkhand has highlighted how the dedicated freight corridor has been facing "long-pending issues" which have remained "unresolved".

The two dedicated freight corridors which are currently under construction -- the Western Dedicated Freight Corridor (WDFC) from Uttar Pradesh to Mumbai and Eastern Dedicated Freight Corridor (EDFC), from Ludhiana in Punjab to Dankuni in West Bengal -- had December 2021 as their completion date which has now been pushed back by six months to June 2022, according to a statement from the Railway Board Chairman VK Yadav who said that the delay was because of the disruption of work due to the coronavirus pandemic.

The minister has specially urged the Uttar Pradesh chief minister's personal intervention to resolve the bottlenecks in his state as over 1,000 km of the DFC passes through it.

"The prime minister has been monitoring the progress of the project closely. Over 1,000 km length of DFC passes through the state of Uttar Pradesh... However, certain issues relating to land acquisition and ROB construction still persist, which need to be resolved urgently for ensuring commissioning of the project work within targeted time.

"You may kindly appreciate that bottlenecks, even in a few stretches in this type of liner project, will stall the commissioning of the entire project," Goyal said in his letter.

He has listed a slew of problems facing the Railways -- pending road over bridges (ROB), hindrances in physical possession of land in areas like Muzaffarnagar, Meerut, Saharanpur among others due to agitation, arbitration cases, demand for compensation and jobs by villagers, undue demand of lease rent by the Uttar Pradesh forest department and protests by villages over building of ROB in Mirzapur district.

In the letters, Goyal has listed all the issues that are being faced by the Railways in specific areas in the states. In West Bengal and Jharkhand, the minister has raised issues of delay in disbursal of awards, arbitration and mutation.

"Out of total length of 1,839 km of Eastern Dedicated Freight Corridor, 203 km (Gomoh-Dankuni) is passing through the state of West Bengal and likely to attract major investment being planned under PPP model. The foremost criterion for initiating bidding for this project is to acquire at least 90 per cent land with mutation. As such, success of this project in your state depends upon early availability of land.

"However, delay in disbursal of awards, pending arbitration, mutations and hindrances in possession of land etc. in various districts has adversely affected project work... You will appreciate that removal of these hindrances are essential to ensure commencement of project work," Goyal wrote in his letter to West Bengal Chief Minister Mamata Banerjee.

In his letter to Bihar Chief Minister Nitish Kumar, Goyal said that the state was a major beneficiary of the project, as 236 km of Eastern DFC is passing through the districts of Gaya, Aurangabad, Kaimur and Rohtas and likely to attract major investment in your state.

He said that land acquisition in certain stretches is held up for long due to delay in disbursal of awards, pending arbitration, mutations and hindrances in possession of land which "adversely affected the project work".

The minister has highlighted two major issues in almost all the states -- land acquisition and delay by the local governments in building land approaches and road over bridges (ROB).

In his letter to the Gujarat Chief Minister Vijay Rupani, Goyal highlighted how out of the total of 1,504 km of the WDFC, 565 km is in the state. Out of the 60 ROBs that were to be constructed, 32 were to be built by the state, however, only 2 have been built and the progress of the other 20 are slow.

Land acquisition for the approaches for 46 out of the 60 ROBs are also pending, he said.

Similarly in states like Haryana, Uttar Pradesh, Rajasthan, Maharashtra and Punjab, delay in land acquisition for ROBs by the state governments have delayed the project.

Railways will also hold a review with state government officials of Uttar Pradesh, Bihar, Gujarat and Maharashtra on September 1.

DFCCIL has been tasked with developing Indian Railways' quadrilateral linking the four metropolitan cities of Delhi, Mumbai, Chennai and Howrah, commonly known as the Golden Quadrilateral. The overall cost is pegged at Rs 81,459 crore.

In the first phase the organisation is constructing the Western DFC (1,504 route km) and Eastern DFC (1,856 route km) spanning a total length of 3,360 route km. These corridors were targeted to be completed in phases by December 2021. DFCCIL had completed a total of 500 km till January.

Last phase of NH-34 four-laning project in Bengal to start on August 31: NHAI